Delusional Mother Of Loudoun County Perpetrator Asks Why Accuser Would ‘Sit There And Take It;’ Says Son Is Being Victimized Over ’15-Year-Old Hormones’ 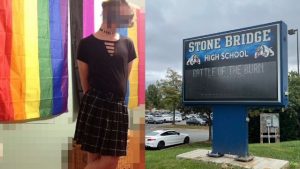 The mom of the teenager who a court in Virginia found “engaged in non-consensual sex” with a female student in the girls’ bathroom of a school located in Loudoun County went on an angry tirade against the boy’s accuser, going on to suggest that the victim of this awful crime was “willing,” making the assertion that a real victim wouldn’t “sit there and take it.”

The mother, who spoke out under condition of anonymity so she wouldn’t out her son, who is still a minor, went on to try and frame her son as the one who as the victim in this situation, as he will now and forever always be deemed a sexual predator for what she said was just “15-year-old hormones.”

This woman and her son are both, in my opinion, mentally ill. Both should be locked up and given a psychological evaluation. Nothing he did and nothing she’s saying is okay or right.

“If I was in a position where I was about to be raped, I would be screaming, kicking, everything,” the woman went on to say in an interview with the DailyMail.com. “You’re 15. You can reasonably defend yourself. You’re not just going to sit there and take it. And so, because there wasn’t a presence of a fight, he felt it was okay to keep going.”

“He’s a 15-year-old boy that wanted to have sex in the bathroom, with somebody that was willing,” she explained. “And they’re twisting this just enough to make it a political hot button issue.”

“What is the end game on this?” the mother asked, going on to suggest her son’s legal troubles are all political. “My son’s going to be going on the sexual registry and be committed to Meghan’s Law for the rest of his life because he had 15-year-old hormones.”

Last October, a Virginia court ruled that there is sufficient evidence to find that the teen “engaged in non-consensual sex” in the girls’ bathroom back in May; the findings are equivalent to a guilty ruling.

The same teen reportedly sexually assaulted another female student last month, after he was transferred over the bathroom incident to another school within the district. The Daily Wire reported on the cases:

The teen, who was wearing a skirt when he sexually assaulted the girl, is not “transgender,” the mother claims, but acknowledged that he’s “trying to find himself” and sometimes wears skirts.

“He would wear a skirt one day and then the next day, he would wear jeans and a t-shirt, a Polo or hoodie,” the mother said in her conversation with the DailyMail.com. “He was trying to find himself and that involved all kinds of styles. I believe he was doing it because it gave him attention he desperately needed and sought.”

When the Daily Mail asked her about her child’s troubled past, that he had sent naked photographs of himself to a female classmate back when he was in fifth grade, she apparently “snapped.”

“What the f*** does that have to do with anything?” she spat. “What are they trying to do? Did they hire an investigator to dig up everything and ruin him for the rest of his life?”

All throughout the interview with the news outlet, the mother admitted that her son was troubled.

“He’s been a challenging child his whole life, which I’ve dealt with myself,” she continued. “My son’s gone through multiple forms of counseling and therapy, resources here, at school, friends, family. It’s been 15 years of hell trying to get him to do better and be better.”

There needs to be an investigation into the mother to get a better understanding of what the boy’s home life is really like. Seems like he’s had a very checkered and unsettling past. This whole situation probably could have been prevented had something been done when these early warning signs of trouble popped up.