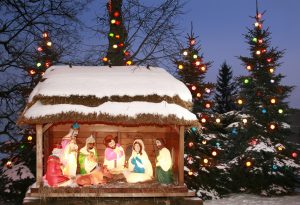 As the war on Christmas rages on, the objections to various holiday traditions are becoming outright loony.

This latest incident combines two of my least favorite things: bumbling, overreaching government, and general disrespect for the best holiday ever.

Citing a report from WBOC-TV, Faithwire’s Tré Goins-Phillips writes that the small town’s decision came after its annual review of codes and policies.

The traditional nativity scene is typically erected in the town circle and is usually sponsored by the Georgetown Wesleyan Church and other local organizations.

Town manager Gene Dvornick claimed that the nativity scene, as well as other displays, could be hazardous “if the wind kicks up and there’s not anyone there and stuff blows out to the traffic lane.”

UPDATE: The town of Georgetown released a statement confirming that the Nativity Scene will NOT be allowed in the town's circle. Here's part of that statement: @47abc pic.twitter.com/pagJQEs7Ev

“We have a beautifully decorated Christmas tree in the center and our light poles all speak of the Christmas season and I think the Nativity scene falls within that,” Charlie Koskey, a Georgetown business owner, told WBOC-TV. “I think it’s important that these symbols represent the faiths of everyone that’s gonna be celebrating this time of year.”

Dvornick assured a local news outlet that the new rule does not “just apply to religious displays.”

Whether or not this qualifies as another attack in the war on Christmas is debatable.

What is clear, however, is that this is an asinine rule. Do we really need such care and protection from the government that we can’t handle the baby Jesus catching some air and blowing into traffic?

This isn’t erring on the side of caution. This is just plain stupid.