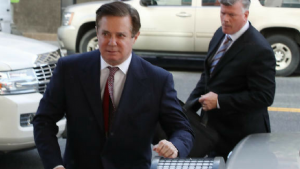 We know that the news media is doing everything they can to milk Paul Manafort’s criminal proceedings for all it’s worth (Trump Russia or bust!), but ABC went a little too far this week.

When we say “fake news”, we’re normally referring to deliberately deceptive or obscured delivery of the facts expressed in a news story, but in this case, the label “fake news” couldn’t be more appropriate.

Manafort, who is currently facing trial for allegedly laundering $30 million of undisclosed lobbying on behalf of Ukranian political interests, has certainly been getting quite a bit of news media attention, but this was a first.

On Wednesday, as ABC cut to a live break to broadcast the President meeting with members of Congress at the White House, *someone* put a headline in their chyron that Manafort had pled guilty to five charges of manslaughter, Town Hall reports.

NewsBusters, who originally caught the glaring error, has the video here so you can see the incredibly fake news.

While ABC was forced to apologize for the error through their Twitter account, their apology is a bit questionable:

Statement from @ABC News: We regret and apologize for the false lower third graphic that aired during our special report. We are investigating how incorrect information was in our system and how and why it was allowed to air. (1/2)

(cont.) We apologize to our viewers and to Mr. Manafort. There simply is no excuse for this sort of mistake. (2/2)

Now, it is of course certainly very good of ABC to apologize to Mr. Manafort, but seriously, how much investigating needs to be done to figure out how this happened?

I’ve never worked in a newsroom, but I’m guessing there’s probably only so many people who would have access to the headlines that go in the chyron, and I would certainly hope that they run a tight enough ship that someone, say, the janitor or an hyped-up leftie intern couldn’t just walk up to their equipment and insert such an outrageously fake headline.

What gives, ABC? Was it too difficult to explain that one of your vehemently Trump-hating employees got a little carried away with their glaring bias?