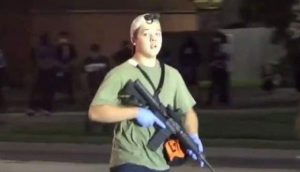 The legal team for Kyle Rittenhouse has filed a motion for a mistrial with prejudice this week, alleging prosecutorial misconduct after claiming the prosecution withheld video evidence they believe could play a key part in the young man’s self-defense argument.

Of course, this wouldn’t be shocking at all, given how hostile the prosecution has been against Rittenhouse. It’s clear that they hate the poor kid, along with all of the radical left-wingers in pop culture and on social media, who want to forego the old fashioned knowledge of “innocent until proven guilty,” and just want to see Rittenhouse punished for killing two of their own.

The seven-page mistrial request alleged that prosecutors had high-resolution drone footage but failed to produce it, only showing only a grainy low-resolution version of the footage in court. The defense said they only received the higher-resolution clip later on Saturday after testimony was over.

The footage was used by the prosecution in an attempt to prove that Rittenhouse chased the first man he shot, Joseph Rosenbaum, before their positions switched and Rosenbaum began chasing Rittenhouse.

The “compressed version” of the footage “was not as clear as the video kept by the state,” the defense said in their written motion.

“The video footage has been at the center of this case,” the defense team went on to write in the motion, stated the footage is the “linchpin” in the prosecution’s case against Rittenhouse.

“The failure to provide the same quality footage in this particular case is intentional and clearly prejudices the defendant,” the motion went on to add.

“The motion also mentioned several other issues with the proseuction about which Schroeder reprimanded Assistant District Attorney Thomas Binger, including bringing up evidence the judge had already banned and questioning Rittenhouse on his post-arrest silence,” the Daily Wire reported.

Rittenhouse is currently awaiting a verdict for charges that are related to the fatal shooting of the two men and the injuring of a third during the riots in the city of Kenosha, Wisconsin.

“Rittenhouse, who is now 18, lives in Antioch, a northern suburb of Chicago about 15 miles from Kenosha. On August 25 of last year when he was 17, Rittenhouse decided to patrol the downtown Kenosha area alongside other armed men in order to protect a used car dealership from looting and vandalism. The city had devolved into rioting over the police shooting of Jacob Blake, a black man, by a white Kenosha police officer,” the report continued.

Kyle was then chased down by several protesters and assaulted, which is when he fatally shot the two men and injured the third. His legal counsel has argued that Rittenhouse acted in self-defense.

“Rittenhouse was charged with five felony charges and one misdemeanor charge. The most serious charge is intentional homicide, Wisconsin’s top murder charge, while the others are reckless homicide, attempted homicide, two counts of reckless endangerment, and being a minor illegally in possession of a firearm,” the report stated.

The firearm charge was tossed out by Judge Schroeder on Monday. Rittenhouse is also being charged with being out after curfew, but that too has been tossed out.

“The jury heard closing arguments in the case on Monday, and as of early Wednesday morning, the jury was still out. A total of 18 jurors heard the case, and 12 will decide Rittenhouse’s fate,” the report said.