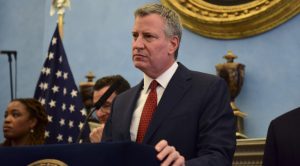 New York City Mayor Bill de Blasio stated on Monday that the city’s school system, the largest in the nation, will not be offering any remote learning options come fall time, which means that all 1.1 million students will be required to attend in-person classes.

The school system has offered a hybrid system this year due to the COVID pandemic, allowing students to come for in-person classes three days a week and to do distance learning two days a week. They then reverse the pattern on an alternating basis. Most parents decided to just do remote learning for the entire week.

However, neither of those options will be available come September when the new school year kicks off.

“It’s time for everyone to come back, it’s time for us all to be together, time to do things the way they were meant to be done,” the mayor stated at a recent press briefing.

“We’re going to have plenty of protections in place as we proved, even during the toughest months of COVID, that we can keep kids and staff safe with a gold standard of health and safety measures,” he continued.

“You can’t have a full recovery without full-strength schools, everyone back sitting in those classrooms, kids learning again,” de Blasio stated while giving an interview Monday on MSNBC. “And that’s what’s going to happen in September.”

The decision to open schools fully comes as positivity rates for COVID-19 in New York and the country have settled into a sustained decline as more people become vaccinated.

In New York City, the share of residents testing positive for the virus on a seven-day average dropped to 0.71% on Saturday from 2.48% on March 8, according to state data.

Nearly half of the U.S. population has had at least one dose of a vaccine, according to data from the Centers for Disease Control and Prevention. In New York, 52% of residents have had at least one shot, Governor Andrew Cuomo said on Sunday.

As of now, the Food and Drug Administration has approved the Pfizer vaccine for kids as young as 12-years-old, with Moderna having sought approval for its vaccine for children as well.

It’s about time. We need to get back to life as usual. There’s no more need for this kind of insanity any longer.