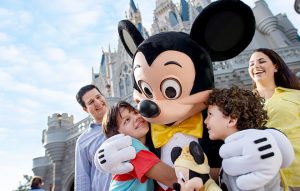 When I was a kid my parents took me to visit Disney World. We had never been before but we had heard the stories of how amazing it was. We waited with frenzied anticipation for the day to come when we could finally go. For us it was more exciting than Christmas!

When the day arrived we drove the family car into the parking lot of the Magic Kingdom and got on the ferry to take us across the lagoon to the park entrance. We exited the boat and began to walk. As we were moving along the fence that surrounded the Magic Kingdom there was an open gate that led into the park. However, it was not an entrance for visitors, but rather a gate used by people that worked at the park.  It was just standing open. My father, seeing an opportunity to short cut really long, hectic lines and save some money decided it would be okay if we just entered the Kingdom through that open gate. Who would know, right? So in we went…my dad, my mother, my brother, and me. Sneaky, sneaky!

After a little bit of a walk through alleyways, maintenance buildings, and backstage areas we were soon standing right in the heart of the wonderful and enchanted Magic Kingdom. We stared in awe at Cinderella’s castle and were giddy with excitement when we saw Mickey and Goofy and Donald and Minnie. We were so high on wonderment that we gave no thought to the fact that my father had actually snuck us in through the back door illegally. We were just excited to be “citizens of the Kingdom” enjoying all the fun and benefits it had to offer. It was truly magical.

Imagine our disappointment when after a few hours of fun a park official approached us and asked why we were not wearing our official Disney wristbands that we should have received upon entrance to the park. My father, attempting to be sly, lied and said that we did indeed have them but they were in a shopping bag that we had accidentally thrown away. The park official said that he would escort us back to the main gate to get replacement bands so that we could continue enjoying the park. All my father had to do was produce a receipt or some proof that he had actually purchased passes. So we began to walk.

As we neared the ticket windows at the park entrance I noticed my father becoming more and more agitated. He knew that he could not produce the proof necessary to justify our presence in the park. We had snuck in! So when the official introduced us to the Disney ticket ambassador my father began to come up with excuse after excuse.

Finally, the park official said, “Sir, you are not a Magic Kingdom ticket holder. We are not sure how you got in the park, but if you indend to stay and allow your children to continue their magical experience then you need to do what’s necessary to procure a legal entrance.”

My father refused! He simply would not do it. Somehow in his mind he had begun to justify being there. He felt like his family belonged and had the same right for us to be in the Kingdom as everyone else. We had tasted the excitement and it was OURS! Damn their rules!

Indignant, he herded us away from the ticket booths and back towards the ferry and ultimately into the parking lot. The excitement, the dream, was over. As we pulled away in our family car we could see the Magic Kingdom in the rear view mirror, and in our hearts we hated that park official that had spoiled our fun. All our father had tried to do was give us the experience and excitement we knew we all deserved and had so readily anticipated. In our young minds, and in the minds of my parents, our sadness and disappointment could only be blamed on one thing…Disney World. The fault was theirs.  But who’s fault was it really?

Now replace the words “Disney,” “Magic Kingdom,” and “park” with the word “America” and maybe then you’ll get the point.