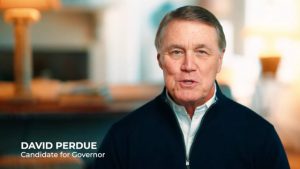 Former U.S. Sen. David Perdue has officially launched a GOP primary campaign to take on Georgia Gov. Brian Kemp for the governorship of the state, according to an announcement he made on Monday.

The winner of the race will likely take on Democrat Stacey Abrams in the midterm election next year.

Reports indicate that Perdue had been mulling over a potential bid for the office for months, having been encouraged to run by former President Donald Trump. The former senator’s plans were confirmed by Politico over the weekend.

Many supporters of the 71-year-old feel he can beat Abrams by helping Republicans to come together, while current Gov. Kemp has no hope of getting votes from Trump’s base.

“Perdue can bring together the Trump base and those Republicans, independents, and moderate Democrats who will find Abrams too radical,” former House Speaker Newt Gingrich wrote last month. “Perdue is the one candidate who can defeat Abrams.”

But Kemp is promising an all-out brawl as he tries to win a second term, with Kemp spokesperson Cody Hall saying Perdue is running only to “soothe his own bruised ego” over losing his Senate seat.

“The man who lost Republicans the United States Senate and brought the last year of skyrocketing inflation, open borders, runaway government spending, and woke cancel culture upon the American people now wants to lose the Georgia governor’s office to the national face of the radical left movement,” Hall commented.

Perdue was supporting Kemp as recently as June, introducing him at the state Republican Party convention. Kemp said Thursday that he couldn’t control whether Perdue would be “a man of his word.”

Perdue’s entry could drag Kemp to the right as he vies for primary support. Kemp had hoped to use Abrams’ Wednesday entry to the governor’s race to rally Republicans to his side, but Trump issued a statement after Abrams announced claiming that his strongest supporters would never vote for Kemp.

Trump’s political action committee commissioned a poll that with Trump’s endorsement, he could beat Kemp in a Republican primary. The former president added fuel to that fire at a Sept. 25 rally in Perry, Georgia, when he pointed out Perdue among a clutch of party leaders.

“Are you running for governor, David?” Trump went on to ask the former senator. “Did I hear he’s running?”

“Born in Macon, Perdue was a business consultant and then an executive at companies shifting clothing production to Asia. He became CEO of Reebok, textile firm PillowTex and discount retailer Dollar General. The cousin of former governor and U.S. Agriculture Secretary Sonny Perdue, David Perdue was elected to the Senate in 2014, beating Democrat Michelle Nunn,” the Newsmax report said.