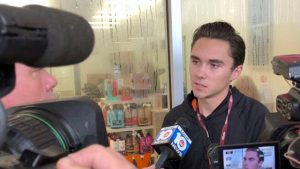 Parkland survivor and anti-gun activist David Hogg recently applied his “talents” — which consist of telling a bunch of easily influenced individuals to not buy stuff, not watch stuff, and not go places — to try strong arming the Publix grocery chain into coughing up a ton of cash — a million bucks — for a donation along with an anti-NRA pledge.

All of this was due to the fact Publix supported an NRA backed GOP candidate running for office.

While the company did cave into halting support for the candidate they originally backed, the whole affair had some unintended consequences. Not only did Publix pull funding from Republican candidates, they ended for for Democrats too.

Publix, the grocery store chain, had donated heavily to Republican Adam Putnam, who is a staunch NRA supporter, but the chain also donated to at least two dozen candidates for federal office who opposed the NRA. The Washington Times reports that the company has given over $760,000 to Democratic candidates since 2008 that oppose the NRA:

…[they] also chipped in for presidential candidates former Secretary of State Hillary Clinton and Sen. Bernard Sanders in 2016, as well as then-Sen. Barack Obama in 2008.

And if that didn’t start to burn Hogg’s biscuits, then the fact that Putnam ended up getting tons of national coverage due to his efforts and is now in a better position than he was before, probably will.

Hogg has proved to be a monumental failure at practically everything he has put his hand to, well besides milking an awful tragedy for all that it’s worth, and the proof is in the pudding.

The NRA, his favorite target of choice, actually saw their donations triple in February and then smashed an all-time record in March, both of which were after massive attacks on the organization by Hogg.

Perhaps he ought to consider a career in a field that actually produces something useful for a wide variety of Americans instead of being an opportunist?