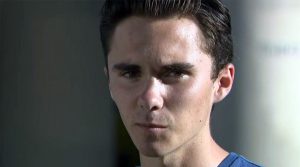 Diehard gun control activist David Hogg recently pledged to launch a “progressive” alternative to MyPillow, but after only a month of the soft launch of the company, Good Pillow has not yet released a single product and the “Good Pillow” trademark belongs to someone else.

Hogg had intended for the company to compete with MyPillow, which is owned by conservative CEO Mike Lindell, an ardent supporter of former President Donald Trump. Hogg said the effort was a “pillow fight” then went so far as to actually recruit a partner, William LeGate, a tech entrepreneur.

“[William LeGate] and I can and will run a better business and make a better product all with more happy staff than Mike the pillow guy while creating US based Union jobs and helping people,” Hogg had tweeted out. “This pillow fight is just getting started.”

The goal was lofty. Hogg and LeGate did not simply want to put MyPillow out of business — under the assumption that the market could not support two politically-minded pillow companies — but also Fox News, which airs MyPillow commercials.

“We are considering airing a commercial on Fox News immediately following MyPillow ads… my ad buyer says it is unlikely they’ll let us do that, though, since Fox News relies on MyPillow & if MyPillow goes under, it could also really hurt Fox News,” LeGate also tweeted not long after the two announced their “launch.”

How did MyPillow CEO Mike Lindell feel about it all?

“Good for them…. nothing wrong with competition that does not infringe on someone’s patent,” he said.

Hogg’s soft launch was fraught with difficulty, as progressives demanded the new company comply with a far-left value system, employing union labor and manufacturing strictly within the United States, perhaps in minority communities, with an eye to environmentalism. The plan was to turn such a profit that Hogg and LeGate could immediately give back to progressive causes.

The company took off, with Hogg promising that progressive consumers “should be able to purchase the items in around a month.”

However, a month has come and gone, and there hasn’t been a single update on the company’s progress. The last missive came out on February 10, when Hogg said told Good Pillow’s Twitter followers that the company was “trying to finalize the list of charity partners will be launching with.”

And it appears the two of them forgot to get the name Good Pillow trademarked. It now belongs to a third party, a person from North Carolina, which means that the brand is now defunct.

Hogg himself is on a break from publicity and social media so there’s no word from him about the status of the company.