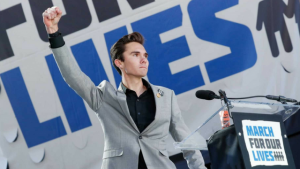 I mean, let’s give the kid a break, he is only seventeen. OK, maybe he’s eighteen by now, but that still doesn’t mean he’s been paying attention in civics class. It’s probably hard to keep up your regular class schedule when you’re busy tweeting out your latest anti-gun platform, conducting die-ins at grocery chains, and spending half your time in the CNN green room, right?

So maybe we can forgive him his latest plan to greatly limit the natural rights of millions of Americans. And, given it’s based on said lack of knowledge on civics and the basic tenets of how our government functions, we certainly don’t have to sweat much.

So what is Hogg’s ill-informed new plan? To troll the President.

That’s right–Hogg’s plan to pass effective gun control is to troll the most trolled President in the history of the United States. Yeah. That’ll work.

“We should all tweet ‘Why didn’t you ban bump-stocks and raise the age to purchase firearm to 21 when you said you would? Are you afraid of the @NRA?’ on every @realDonaldTrump tweet from now on,” he Tweeted out to his 800,000+ followers on Monday.

He also suggested a “die-in” at a Trump hotel.

The Washington Times reports that Hogg’s new plot is unlikely to do…anything:

A president does not have the legal power to raise the various federal weapons-purchase ages, which are set by law and also regulated by states anyway.

As for bump stocks, the Department of Justice already has proposed that the devices, which enable a legal semi-automatic weapon to fire like an outlawed automatic one, are illegal under current law. But the regulatory proposal can’t take effect yet, under the requirements of administrative law.

Ironically, some of Mr. Trump’s moves of immigration have been halted by judges because of hasty regulatory decisions that the jurists decided don’t meet the legal requirements of due consideration and public input.

Twitter users who did pay attention in school were quick to point out his failure:

“Dude,” wrote the more astute student of government. “Do you understand how the government works. POTUS cannot magically ban and move the age up to buy a firearm. Maybe look at the other branches?”