David Hogg’s 15 Minutes Are Up, But It’s Not Stopping Him From Being Wrong About Guns 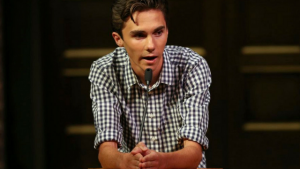 David Hogg is back! Actually, he’s not really, since the media machine has moved on to other things, like immigrant children and Trump walking in front of the Queen.

But he’s still under the impression that he’s influential, and is continuing to hammer away at gun control like there’s no tomorrow. Or rather, like there’s a tomorrow in which only criminals in the US will be armed.

His latest checked box on the “50 Stupid Gun Control Arguments Leftists Always Use” is an endorsement for waiting periods, and his reasoning, as pro-2A Twitter would go on to inform him, was based on pretty much the opposite of what waiting periods do.

“Waiting periods save lives,” he Tweeted, referencing a study that found that “with mandatory waits—no matter the total length—had on average 17% fewer murders and about 10% fewer suicides.”

To begin with…no, they don’t. While the study cited in the article he referenced does see lower homicide and suicide rates in states with mandatory waiting periods, the researcher admits that there is no way to determine that people are actually changing their minds as they wait for firearms.

The article also makes clear that there is a de-facto ban on federally funded gun violence research, and again the researcher cited, who simply looked into firearm homicide and suicide rates in states that had waiting periods rather than performing an actual study, says that without solid data you can’t ever make reliable conclusions about the effectiveness of something like a waiting period.

Also, if we look to Broward County, Hogg’s home county where crime rates were artificially lowered by manipulated reporting, it’s always possible the data out of high-gun-control states is unreliable.

Second, we do know of instances where people have themselves been killed while waiting for a firearm, as one Twitter user pointed out to Hogg:

He’s referencing Carol Bowne, who was stabbed to death by her ex-boyfriend during one of these “life-saving” waiting periods.

Bowne is not alone. Many women just like her have been assaulted or killed while waiting for a handgun, often from criminals who don’t care whether or not they obtain their weapon legally.

Just like every other far-reaching gun control measure, the only people waiting periods tend to stop from obtaining a firearm are law-abiding citizens.