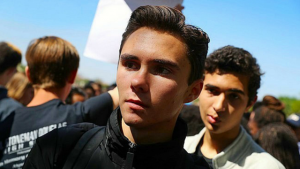 You can’t make this stuff up!

By the time peewee anti-gun activist David Hogg and his little sister, Lauren, release their forthcoming book, #NeverAgain (yes, apparently the title is a hashtag), they will have been activists for just under five months.

Hogg, his sister, and the handful of high school anti-gun activists that were groomed by the media to rally against your Second Amendment rights following the tragic shooting at their Parkland, Florida high school, entered the national spotlight in the third week of February 2018. The Hogg siblings will release their book on June 5th.

Hogg announced the plans for the book on–where else–Twitter, the platform that has gained him hundreds of thousands of followers and from which he has signaled the masses to join his boycotts against Laura Ingraham’s sponsors and now, investment firms and their clients that have ties to gun manufacturers.

Today @lauren_hoggs and I are announcing our book #NeverAgain that tells the story of the foundation of this movement for those we lost. Lauren and I will be using the money made from the book to help heal the community. #NeverAgain out June 5th https://t.co/Vh2gWVWNGq

“Today @lauren_hoggs and I are announcing our book #NeverAgain that tells the story of the foundation of this movement for those we lost,” he tweeted. “Lauren and I will be using the money made from the book to help heal the community.”

Lauren, in her own announcement, clarified that the vague plan to use the proceeds to “heal the community” is to “prevent gun violence”, which actually doesn’t really clarify anything at all. But it’s probably quite safe to assume they’ll be using the money to fund political efforts to take away your guns.

Announcing #NeverAgain, a book by @davidhogg111 and I that tells the story of how we turned our grief into action and how we fight and speak out for those who no longer can. All proceeds going to healing Parkland and to prevent gun violence. Coming out June 5th.

The book’s description says it will be a “manifesto for the movement begun that day [of the Parkland massacre], one that has already changed America–with voices of a new generation that are speaking truth to power, and are determined to succeed where their elders have failed,” which sounds super duper creepy.

“With moral force and clarity, a new generation has made it clear that problems previously deemed unsolvable due to powerful lobbies and political cowardice will be theirs to solve,” it continues.

Once again, these kids have been activists for two months. And they’re writing a book. They’re also still in high school.

It’s also pretty offensive to the students who have, you know, actually been working hard to implement policy change rather than partying with celebrities and calling for boycotts on Twitter, like Kyle Kashuv, who has been speaking out on behalf of the Second Amendment and meeting with elected officials, including the Vice President, First Lady, and the President himself.

Kashuv has been a vocal opponent of Hogg’s, and was quick to point out that Hogg was actually announcing his book deal on a platform he was supposed to be boycotting.

NRA spokeswoman and vehement 2A supporter Dana Loesch was quick to point this out to the clueless Parkland teens:

At the end of the day, we can laugh at the Hoggs all we want, but we all know they’re not solely responsible for their undeserved fame. There are calculating adults behind these kids, pushing them and grooming them every step of the way to parrot the same, tired, anti-gun talking points we’ve been hearing for years.

Their book is just another attempt to keep them in the news, and to funnel funds into the organizations and legislature that promise to make your kids less safe than ever before.

The largest empire in the world couldn’t take away our guns in 1776, and they’re unlikely to succeed now. Tyrants come in many forms, but we will fight them all the same way: in defense of liberty.