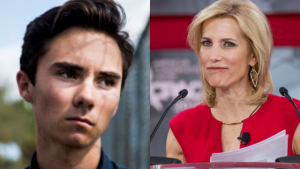 Poor little Davey! He’s been trying oh so hard to stay in the headlines, but unfortunately, his attempts to broaden his horizons and boycott all the things is not going very well.

You think he would have learned from the last time he called for a boycott of Fox News host Laura Ingraham, when her show’s ratings jumped after he targeted her sponsors for hurting his feelings after he was rejected from some top US colleges.

Or perhaps from his ill-fated Publix die-in, in which the grocery chain, instead of redirecting money they had been donating to a pro-2A gubernatorial candidate to their anti-2A fund, just stopped funding to anything political altogether.

But let’s give Hoggey a little credit, he may not have a lot of values, but he at least believes that if at first you do not succeed, try, try again, right?

Hogg’s latest boycott of Ingraham came after she said on Monday during “The Ingraham Angle” that the holding facilities for illegal immigrant children who were separated from their parents were “essentially summer camps or as the San Diego Union-Tribune described them today, is looking like, basically, boarding schools.”

Ingraham clarified what she meant later in her show, saying, “The San Diego Union-Tribune today described the facilities as essentially like what you would expect at a boarding school. So I will stick to there are some of them like boarding schools.”

In response, Hogg had sent a snarky tweet to Ingraham early on Tuesday, saying, “So @IngrahamAngle we meet again. Who are you biggest advertisers now?”

Hogg then proceeded to publicly call out Ingraham’s advertisers in an attempt to ruin her career:

If we get these advertisers pulled maybe @Ingraham will have to become a camp counselor and learn how wrong she is.
1. @BeachesResorts & @SandalsResorts
2.@SIRIUSXM
3. @CarfaxReports
4. @AceHardware
5. IAC (Angie’s List, Home Advisor, Match)
6. @Cabelas
7. @JohnDeere

Well, Fox News wasted no time. They jumped to Ingraham’s defense, squashing this desperate-for-attention little bug before he knew what hit him by calling upon Ingraham’s extensive humanitarian work:

Laura Ingraham’s very personal, on-the-ground commitment to the plight of impoverished and abandoned children—specifically in Guatemala— speaks for itself. So too does her strong belief in a commonsense, legal immigration system, which will continue to be a focus of her show. FOX News will never tolerate or give in to attempts to silence diverse viewpoints by agenda-driven intimidation efforts.

Aw, sorry Hogg. Can’t wait to see what you come up with next time, though!