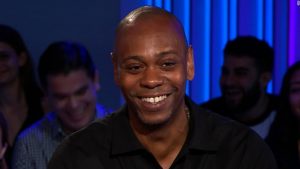 If you ever wanted proof our mainstream media is blatantly biased, this week, we got it.

OK, so we get it every time Trump sneezes, but the mainstream media response to Kanye West’s visit to his “dragon energy” homie in the White House has been pretty appalling.

We are treated, on a regular basis, to the incoherent rantings of a plethora of left-wing celebrities who are hailed by the media as bold, brave voices for change.

But the moment Kanye throws a MAGA hat on his head, communes with President Literally Hitler, and defends American individualism, suddenly we’re worried about celebrities’ mental health, now, are we?

I don’t know about you, but the condescension and racism West has been subject to following his presser in the Oval Office legitimately makes me see red.

He is, thankfully, not without his allies in the entertainment industry. Another celebrity who seems uniquely capable of that little old thing called “thinking for yourself”, Dave Chappelle, voiced his support during an appearance with CNN’s Van Jones Thursday.

“First of all, you know, Kanye’s an artist, man. He’s a genius. … I think that the angle he’s seeing things from, is about the divisions he sees. And he’s not inconsistent with what he says,” Chappelle told Jones, after jokingly pretending to walk off set when Jones mentioned Kanye.

Whenever Kanye speaks in public, it’s absolutely never dull. While much of what he has to say seems to only make sense in his own mind, he also peppers his rants with undeniably sound reasoning.

For example, on Thursday, he defended the Second Amendment with the simple, and accurate, logic that “it’s not the legal guns” and “we have a right to bear arms.” He also reiterated his refusal to bend to the will of liberals who think he should think and feel a certain way simply for being black.

Chapelle, who said he didn’t agree with everything Kanye said, flatly supported Kanye’s right to say it.

“I’m not mad at Kanye. That’s my brother — I love him, I support him,” he continued. “But, you know, I don’t have to agree with everything that he says. I just trust him as a person of intent.”

If liberals were ideologically consistent, they’d all feel this way.

Make no mistake, Chappelle went on to criticize Trump and things Kanye said, but that’s exactly why his ability to express support and love for Kanye in spite of all this is what the left really needs to hear, and what, according to their own ideology, they should be able to agree with.

Kanye, who was raised by a single mother and drug himself up out of poverty through hard work and raw talent, who now declares he has a right to think and say whatever the *bleep* he wants, epitomizes what it means to be American.

You may not agree with him. You might not consider him sane. You might dislike his music. But anyone who considers themselves a champion of liberty has to respect the stance he’s taking right now.

It’s truly a shame that the left is so angry at Kanye, because in reality, what he’s saying and doing right now could be something that unites Americans across the ideological spectrum.

As crazy as this sounds, Kanye West and Dave Chappelle are reminding us what it truly means to be individual and free right now. And it’s a message Americans sorely need to hear.