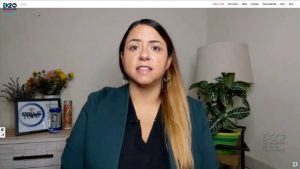 If something goes wrong in your life, in our country, in the world at large, the person you should point the finger at for being responsible for said tragedy is President Donald Trump.

Well, that’s what the radical left-wing in America seems to be doing, anyway. Everything is Trump’s fault. Everything.

In fact, a woman whose father passed away from the coronavirus recently came out and said that “his only preexisting condition was trusting Trump.”

Yeah. This doesn’t smell at all like narrative manipulation to boost Joe Biden in the polls and convince folks to vote for him in November. I mean, sure, the woman in question spoke at the Democratic National Convention, but that’s nothing.

Kristin Urquiza suggested that her dad contracted the disease at an Arizona karaoke bar in May “after the stay-at-home order was lifted.”

“He had faith in Donald Trump,” Urquiza said. “He voted for him, listened to him, believed him and his mouthpieces when they said that coronavirus was under control and going to disappear, that it was OK to end social distancing rules before it was safe, and that if you had no underlying health conditions you’d probably be fine.”

“His only pre-existing condition was trusting Donald Trump — and for that he paid with his life,” Urquiza said.

So what Urquiza really seems to be saying is that her father was incapable of making his own decisions and weighing the risks of being out during a pandemic. That’s what I’m getting out of all of this.

And surely there were precautions he could’ve followed, yes? Was he incapable of independent thought? How is his decisions the fault of Trump?

Also, it’s not the man’s fault he caught the virus. There’s far too many ways to spread this thing to completely shut it down and prevent all cases of it.

How about we stop blaming each other for this mess and band together to take care of each other? That sounds like a better plan than being a pawn for a political party during an election year.