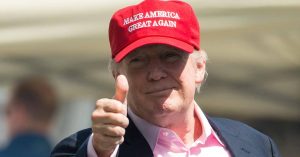 Boy, I tell you what. This election is bouncing around all over the place so much it’s enough to make your head do a full Linda Blair head spin and go flying right off your shoulders.

According to a data firm, President Donald Trump is “still in line” take down Democratic presidential nominee Joe Biden in the critical battleground state of Arizona.

Hold on to your butts, folks. The ride is about to get wild.

Arizona election officials are continuing to tabulate outstanding ballots, which the Trump campaign has said should cut in favor of Trump and give the president the boost he needs to overcome his deficit to Biden. If Trump can get the votes he needs to overtake Biden and secure Arizona’s 11 electoral votes, Trump’s pathway to reelection is on much steadier footing, though still likely an outside shot.

Arizona officials were continuing to release data on ballot counts early into the morning on Thursday. After the last dump of counted ballots, the Phoenix-based data analytics and survey research firm Data Orbital said that Trump was still on track with their model to overtake Biden. The data firm released numbers

Data Orbital posted up a thread on Twitter on Wednesday evening that ended Thursday morning, saying:

Maricopa County (final update for the evening) – 57.9/40.5 Trump to Biden total ballots counted 62,002. Net gain of 10,783 for President Trump. Trump is still in line with what he needs to catch up statewide. #Election2020 #AZ #ElectionTwitter

Maricopa County (final update for the evening) – 57.9/40.5 Trump to Biden total ballots counted 62,002. Net gain of 10,783 for President Trump. Trump is still in line with what he needs to catch up statewide. #Election2020 #AZ #ElectionTwitter

Tim Pearce, in his piece for the Daily Wire, said, “Garrett Archer, a data journalist for ABC 15 Arizona, backed up Data Orbital’s read of the data, saying that the fresh data puts Trump on track to overtake Biden’s lead, though narrowly. Arizona is still either side’s state to take.”

“While on the surface good, this drop is a ‘tread water’ for what Trump would need to flip the state. As we get closer to the end, the ballots get less friendly (ballot drop off uni will have a lot more Independents in them),” Archer said on Thursday morning.

“Trump now needs 68,390 to catch Biden. There are approximately 430k or so ballots left in the state,” he added.

Here are the statewide stats on that Maricopa drop of 62k ballots. Trump now needs 68,390 to catch Biden. There are approximately 430k or so ballots left in the state. pic.twitter.com/a4u9FPkx8Y

So, the question is, will Biden end up winning the state of Arizona, flipping it blue for the first time since President Bill Clinton took it in 1996? Or is Trump going to take it and keep it red, where it belongs?

I don’t know that we can even speculate on this. That’s how messed up it all is. Guess we’ll find out sooner or later. Hopefully.