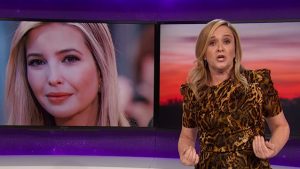 On Wednesday night’s episode of Samantha Bee’s show “Full Frontal,” the controversial “comedian” issued an apology for calling President Trump’s daughter Ivanka the “c-word” last week, however, not everyone is buying it.

Conservative commentator and outspoken Second Amendment advocate Dana Loesch was not at all impressed with Bee’s efforts on the topic. So, in typical Loesch fashion, she completely destroyed her in a series of tweets.

As Twitchy told you, last night on “Full Frontal,” Samantha Bee issued what can most charitably be described as a half-a**ed apology for calling Ivanka Trump a “feckless c*nt” (but not the incest joke). She clearly wasn’t sorry, but it was good enough for her liberal fans like Zack Ford:

Thank you, @iamsambee for a spot on response to your c-word controversy. Anyone still wasting their breath attacking you *cough* @DLoesch *cough* is just trying to distract from whatever real issue they don't want to address. https://t.co/LBPGO5NHUM https://t.co/ZtTWmBlbSy

First of all, Bee attempted to make a point about immigration by attacking Ivanka Trump for embracing her child. And second of all, Bee made herself the story because she wanted the attention. Loesch — like so many other conservatives — saw right through it. And this morning, she called Bee out on her flaming B.S.:

.@DLoesch: I don’t feel sorry for Samantha Bee, she got what she wanted – this is the most anyone has ever talked about her pic.twitter.com/g9h3yhcIGZ

Talk about an epic burn. There’s no doubt Bee will be smarting from that one for a long, long time.

What’s truly sad about this whole situation is it illustrates just how far we’ve fallen from basic human decency that we have to resort to vile name calling instead of lively debate and discussion.

Perhaps one day, when the left finally grows up, we’ll be able to all come to the table and discuss these issues and come up with real solutions.