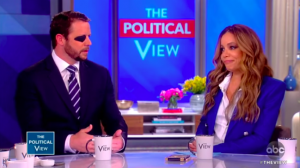 When it comes to politics, give us quality over quantity every time. For every ten tweets some politicians make blurting out their every thought on even the most asinine subject, Rep. Dan Crenshaw gifts us one clever, succinct, and often hilarious remark.

As if his no-nonsense approach to being a statesman wasn’t enough (it is), the dude has just never failed to impress with his classy responses to leftist squawking and even deeply offensive jokes at his expense.

When I saw that Lt. Crenshaw was slated to be a guest on The View, I dang near spilt my drink. If anyone needs a dose of tastefully-administered reality, it’s those gals.

Y’all, I am proud to report to you that the man did not disappoint.

The Texas Republican sat down with the ladies to discuss Trump, the border wall, illegal immigration, and even Ilhan Omar. And, in his own sharp, respectful way, set them straight on each of the aforementioned topics.

Enjoy watching their circuits overload when Crenshaw asks that they actually cite a source for the “facts” they recite on the issue of immigration. Hilarious.

And, then, venturing into territory that even this writer likes to avoid, Lt. Dan took on Ilhan Omar:

If we really want to get technical, sure. Some people did do something on 9/11. Purely on that basis, the content of Ilhan’s comments wasn’t wrong. No one has ever argued that it was. The context and the dismissive intent were the issue. This should be obvious to anyone with two brain cells to rub together, but apparently it begs explanation when you’re on The View, and thankfully Crenshaw was happy to oblige.

Somebody needs to pin a medal on this man for sitting through 20 minutes of those cackling cauldron-stirrers and still keeping his cool.

Crenshaw’s signature civility and wit shouldn’t be so unique in politics. Sadly, it is, so let’s share examples of it—especially such brilliant ones as this—whenever we can.