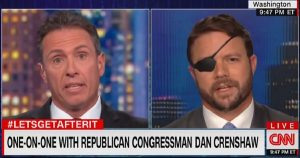 Holy buckets, y’all, looks like there finally was a reason to watch CNN this week!

And it went exactly how you’d expect.

Crenshaw was happy to discuss whether or not Trump’s infamous phone conversation with the president of Ukraine in July was an impeachable offense depends on whether or not it’s wrong to ask another country to investigate what appears to be obvious wrongdoing simply because it could affect American politics as a result, because he’s one of America’s last true gentlemen.

When it came to the argument that campaign finance laws are somehow relevant to foreign policy, however, Crenshaw shredded Cuomo’s errors in the epic, factual fashion we’ve come to love from him.

Cuomo got the ball rolling in the brief segment by asking Crenshaw if he agrees that there was something “wrong” with Trump asking Ukrainian President Volodymyr Zelensky to support an investigation into a company that, as we now know, was paying former Vice President Joe Biden’s son an insane amount of money for reasons that we still don’t know. Except, you know, who his daddy is.

“I’m not sure I agree with the premise that he’s done something wrong,” Crenshaw said. “I understand that there’s a theory about wrongdoing, but the facts do not back that up.”

Crenshaw argued that Hunter Biden’s dealings with Burisma Holdings was a matter of American “public interest” because “our former vice president had a clear conflict of interest with his son being a board member of a company that was being prosecuted by somebody that the vice president was trying to get fired.”

You’d think it’d be obvious, and you can bet your boots the Dems would be all over Donald Trump Jr. if he were in Hunter Biden’s position.

But, of course, if you ask Cuomo, Trump “went after Biden because he thought it would be good for him.”

“If something turns out good for the president, I guess, as you would put it, ‘politically,’ but it’s also in the public interest, then what’s the right answer?” Crenshaw answered, having apparently heard the phrase about the goose and the gander before.

Cuomo deflected the idea that Donald Trump taking out an obviously corrupt politician seeking to run the country can reasonably come with the fringe benefit of Trump not having to worry about that corrupt politician running against him by turning to campaign financing laws. “If you have multiple points of interest in something, and one of them helps you in the election, you’ve got trouble,” he retorted.

“Now you’re trying to make this a campaign finance law thing, and that’s a stretch,” Crenshaw responded. “That’s an enormous — it’s really difficult to make that kind of political leap.”

Cuomo, fancying himself a “journalist” and not just a loudmouth with a politically useful last name, all but argued for pure altruism in saying that Trump should not benefit in the slightest from something that, first and foremost, benefits the American people.

The insanity is too much to handle. I would have blown a gasket, but, as usual, Lt. Dan held it down and made a sound argument.

Here’s hoping CNN viewers get more of that from him, Lord knows they’re not getting it from the usual programming.