Dan Crenshaw Offers Help, Support to SNL Star Who Once Roasted Him 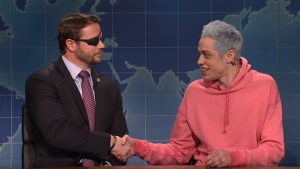 So far, Representative-elect Dan Crenshaw is a class act who is winning our hearts with his measured, intelligent commentary on the issues and gracious response to the low-brow mocking of his eye patch. And he hasn’t even been sworn in yet.

He’s like the anti-Alexandria Ocasio-Cortez, if you will. While she still awaits swearing-in we’re already sick of her, and fully-convinced she has no idea what she’s doing, Crenshaw has already made a great statesman before even starting the job.

You likely know his name because of the significant media coverage he got last month, when SNL’s Pete Davidson mocked him for wearing an eye patch, which he dons after losing an eye in Afghanistan.

While supporters were aghast at the level of disrespect for a wounded vet, the former NAVY Seal was very good-natured about it, appearing on a later episode to take a turn mocking Davidson (which wasn’t hard to do) and accept the comedian’s apology.

Davidson is in the news again this week, for a much more serious matter: he posted a cryptic message on Instagram which led many to believe he was contemplating suicide and was even visited by NYPD to make sure he was safe.

As soon as Crenshaw caught wind of Davidson’s concerning message, he called him and offered support and encouragement.

“I told him everyone had a purpose in this world,” Crenshaw told KPRC News, according to Conservative Tribune. “God put you here for a reason. It’s your job to find that purpose. And you should live that way.”

“We’re not good friends,” he added. “But I think he appreciated hearing from me.”

Davidson might be famous, but he’s still young and likely as lost as any other 20-something. This is good, solid advice he’s likely not going to find in the entertainment industry too often.

“It was a good conversation,” he added.

It’s also a humbling reminder that many of the people on the left who ignite our anger may often be struggling in ways we don’t realize. Remember to pray for these folks, and for people like Davidson who may be feeling the pains of this harsh, fallen world of ours.

Most of all, though, don’t ever get so puffed up on the partisan foolishness that you’re above reaching out to someone who may need a friend.