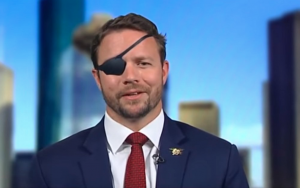 Rep. Dan Crenshaw took President Joe Biden to the woodshed during an interview held on Fox News Monday evening, stating that the crisis unfolding at the border is all because of Biden and that he doesn’t know how to read the president’s intentions other than he’s trying to act for the future political gain of the Democratic Party.

“So few takeaways from my visit, one absolutely a crisis. I was at the Border Station in Rio Grande City, it’s 6,000 illegal crossings just last month, that’s the most they’ve had in history. But guess what, that’s going to actually double this month. There’s thousands a day and it’s completely unsustainable. Turns out this is really hard. See, the Biden administration is dealing with that now. It’s really hard to process thousands and thousands of people. It’s also very preventable. Look, as he said, on day one, Biden reversed the remain-in-Mexico policy. This was the major deterrent to people coming across. Look, only about 10% of people asking for asylum have a valid asylum claim. So when you disincentivize that, say, ‘Hey, okay, fine. Wait and adjudicate your claim in Mexico.’ Well, people don’t tend to come across. But when you tell them ‘Look, we’re not going to deport you, might even give you asylum, and we’re definitely gonna release you, give you a COVID test and a bus ticket anywhere you want,’ you’re gonna get a huge influx of people. And now Texas is having to foot the bill, spend hundreds of millions of dollars on border security, because Border Patrol now has to be, you know, taken up doing processing and humanitarian issues. And I actually just introduced a bill tonight to pay Texas back for our border operations over the last 10 years,” Crenshaw said.

Later on, Fox News host Sean Hannity went on to say, “Well, okay, now, a lot of this too, congressman, is based on one thing, and that’s the promise of amnesty and a path to amnesty.”

“Oh, so you’re able to vote in three years? How convenient for Democrats? Is that partly what this is about?” Hannity then asked.

“Yeah, look, I don’t know how else to read their intentions at this point,” Crenshaw replied. “I think Democrats used to be with us on basic border security and basic rule of law. But now Biden basically refuses to do his duty under the Constitution. The Constitution says the president is there to enforce laws passed by Congress. Well, then you have to enforce section 1325 which says it’s illegal to cross the border.”

This has never been about helping people become productive legal citizens of this country. It’s always been about bringing illegal immigrants here, fattening them up on free goodies from the government, and then expecting them to be loyal Democrat voters in return.

These folks are being used like political pawns and it’s rather gross and disgusting. The left seriously has zero shame.