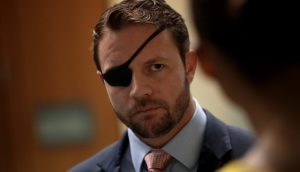 What Crenshaw, a decorated veteran, had to say about the whole mess is brilliant and exactly what this country needs to hear right now.

Crenshaw, who earned two Bronze Star Medals, the Purple Heart, and the Navy and Marine Corps Commendation Medal with valor for his ten years as a Navy SEAL — during which time he lost an eye due to an IED blast — had a far different reaction than Democratic lawmakers.

“If you’re offended by a shoe celebrating the flag of the American Revolution, it’s a good indication that you may be better off living in a permanent safe space. Or Cuba,” Crenshaw tweeted Tuesday.

If you’re offended by a shoe celebrating the flag of the American Revolution, it’s a good indication that you may be better off living in a permanent safe space.

Crenshaw’s reference to Cuba is particularly relevant in the Nike/Kaepernick debate, as the former San Francisco 49ers QB sparked outrage, particularly among Miami’s Cuban population, for celebrating Fidel Castro during his final season in the NFL. When a Cuban reporter from the Miami Herald called out Kaepernick for wearing a shirt featuring Castro and Malcom X with the caption “Like minds think alike,” Kaepernick responded by praising the brutal dictator.

“One thing that Fidel Castro did do is they have the highest literacy rate because they invest more in their education system than they do in their prison system—which we do not do here, even though we’re fully capable of doing that,” said Kaepernick. When the reporter pushed back by noting that Castro broke up families, Kaepernick replied by slamming America, once again. “We do break up families here,” he said. “That’s what mass incarceration is. That was the foundation of slavery, so our country has been based on that as well as the genocide of Native Americans.”

What in the world gives Kaepernick so much sway and pull over Nike? Has he actually done something worthwhile that makes him such a cultural force that the world’s leading shoe manufacturer would opt to listen to his whining and remove a shoe because he was offended by it?

The only thing of note he’s ever done is disrespect the flag. That’s it. In reality, this whole issue exposes just how much folks on the left hate this country and the principles it stands for.

This is why liberals are such a threat to our way of life. They don’t want to fix this country and make it more free and equal for all people. They want to raze it to the ground and build some fabled utopian society in its place.

Unfortunately, since human beings are imperfect, this will never happen.