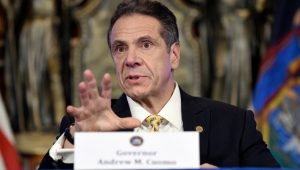 It seems that New York City GOP mayoral candidate Curtis Sliwa is not at all a big fan of Gov. Andrew Cuomo, and for good reason given all of the allegations of sexual harassment and of course the COVID-19 nursing home scandal.

According to Sliwa, Cuomo is a “sanctimonious hypocrite” who will more than likely claim qualified immunity in his defense against claims of sexual harassment from both former and current female state workers.

The lawsuits that are inevitably coming against him will end up costing New York taxpayers millions of dollars.

“Not a nickel, dime, and penny of his personal fortune will be spent in defending it,” Sliwa, the founder of the Guardian Angels crime prevention organization, stated during a conversation he had on Newsmax’s “National Report.” “We the taxpayers will have to do that, and when settlements are made because you know this isn’t going to go to court, this is going to cost tens of millions of dollars. Cuomo will not have to spend any of his personal fortune. It will be we, the taxpayers, who cover him because he has qualified immunity, but he wants to (take) qualified immunity from all police officers in New York state.”

Cuomo also won’t have to spend the money he made from the $5.5 million he made in sales for his book about handling crisis during the coronavirus pandemic, said Sliwa.

Still, he said there is “no doubt” Cuomo will have to leave office in the wake of the damaging report from Attorney General Letitia James detailing claims from several former and current state employees that he sexually harassed them.

“My nickname for Andrew over the years has been Andrew ‘Evil Eyes’ Cuomo and he is really evil, right down to the marrow of his core,” Sliwa said, expressing his full distaste for Cuomo. “Notice, the walls are caving in on him, even amongst those who have been loyal to a fault to him.”

The governor has battled to remove qualified immunity from every police officer in the state, but he wants to use it for himself in the civil lawsuits that have been filed against him, and that makes him a ‘hypocrite,” said Sliwa.

Sliwa then said that Cuomo likes to think he can run for a fourth term, but he went on to say that Democrats are “beginning to realize that they no longer have anything to fear,” from the governor.

However, Sliwa said that what he really wants to know is why Democrats, who knew of this man’s sick and twisted behavior early on in his governorship, still “enabled him.”

Sliwa also said he objects most, as an Italian-American, to Cuomo’s claims in his denial statement that he hugs and kisses people because of his cultural heritage.

“He blamed it on the fact of his Italian-American tradition, that it was in his DNA, that it was learned behavior from his father, the former governor, Mario Cuomo, and his beloved mother, Matilda, thank God who is still alive at 89,” said Sliwa, going on to refer to the governor’s excuse as a “disgrace.”

It’s a pretty safe bet that Sliwa is right on the money about this costing New York taxpayers a lot of bread. Cuomo really needs to save himself the embarrassment of being impeached and just resigning. It’s not that hard. Just quit now and save people money.