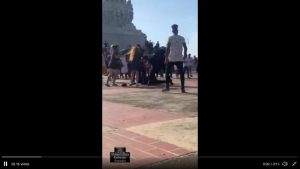 Cuba’s dictatorial government is now apparently cracking down on the huge pro-democracy demonstrations and protests happening in the country, as dissidents and allies report the Cuban police are “arresting, beating, and killing protesters.”

The Associated Press has reported on Tuesday that Cuban police are now “beefing up” patrols, supposedly done by the order of Cuban President Miguel Diaz-Canel. Diaz-Canel has made it abundantly clear that he will use force as a means of responding to this new movement.

An internet blackout has been put into effect for the country, which is currently making it rather difficult to confirm stories of Cuban officials’ response to the protests.

“Authorities appeared determined to put a stop to the demonstrations. More than a dozen protesters were detained, including a leading Cuban dissident who was arrested trying to attend a march in the city of Santiago, 559 miles (900 kilometers) east. The demonstrators disrupted traffic in the capital for several hours until some threw rocks and police moved in and broke them up,” the AP went on to report. “Internet service was spotty, possibly indicating an effort to prevent protesters from communicating with each other.”

“On Monday, Cuban authorities were blocking Facebook, WhatsApp, Instagram, and Telegram said Alp Toker, director of Netblocks, a London-based internet monitoring firm,” the AP said, adding, “We’ve seen how the campaign against Cuba was growing on social media in the past few weeks. That’s the way it’s done: Try to create inconformity, dissatisfaction by manipulating emotions and feelings.”

Diaz-Canal has his own access to social media; he remains on Twitter giving official government updates on the situation on the ground in Cuba.

Florida media outlets report that dissidents have been using SMS messaging services to get video and narrative about the protests out of the island nation. One South Florida resident told Miami’s Local 10 news that “his friend in Havana sent him text messages asking him to tell friends in Miami that Cuban police officers were arresting, beating, and killing unarmed civilians.”

Video posted to social media, often through intermediaries in the United States, seems to confirm reports that Cuban police are engaging in a violent crackdown of pro-democracy demonstrations.

These videos are definitely shocking, however, the problem here is that they are unconfirmed due to the internet blackout.

“Jose Daniel, the leader of Cuba’s largest opposition group, the Patriotic Union of Cuba (UNPACU), was arrested as he left home to join the protest in Santiago de Cuba in the east of the country on Sunday. His whereabouts is unknown, UNPACU activist Zaqueo Baez” the news organization reported “Luis Manuel Otero Alcantara and Amaury Pacheco, two members of a dissident artists’ collective that has made headlines spearheading a broader protest movement in Cuba in recent years, were arrested on their way to protest in Havana, Pacheco’s partner Iris Ruiz told Reuters. Otero Alcantara was in jail while Pacheco’s whereabouts were unknown.”

Videos have been sent out confirming that theses protests are indeed still going on, regardless of what the Cuban government says is happening.

Sen. Marco Rubio has played a critical role in sharing the videos of these protests.

The protests began over the weekend after many days of rising COVID cases, coupled with food and medicine shortages.