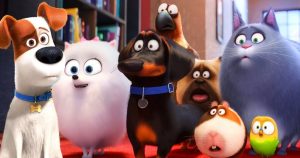 For all the incessant squawking over LGBTQIAQWERTY+ advocacy, you’d nearly forget that such individuals make up less than 5 percent of the U.S. population.

What’s hilarious is that the push for representation of minority demographics in entertainment is really a push for overrepresentation.

I can think of no legitimate reason why LGBT folks should be banned from all forms of media, and approximately nobody on God’s green earth is proposing that. But if you listen to the squawkers, you’d think some white, heterosexual, Republican supreme Hollywood overlord was hard at work keeping these folks from ever being made into film and TV characters.

Now, to be sure, both ends of the political spectrum like to make their fair share of pandering film offerings. In the age of “wokeness,” however, even the most benign, sociopolitically neutral content is rife with microaggressions and latent white supremacy.

Thanks to TheWrap.com, you can even make an informed decision about all the “heteronormative” propaganda your children are consuming. The site’s review, which I was hoping was just a brilliant bit of satire, of The Secret Life of Pets 2 aims to help you with that.

Because, you know, it’s a kid’s movie and we must be sure never to let kids switch their brains off for a moment or two and just be simply entertained.

The review reads, in part:

The Secret Life of Pets 2, on the other hand … effectively acts as an animated ode to heteronormativity, toxic masculinity and patriarchal worldviews, passed off as harmless plot points to entertain young audiences.

Buckle up, folks. It gets worse.

Pets 2’s descent into the bowels of what reads as conservative messaging begins as Katie (voiced by Ellie Kemper), Max’s owner, randomly meets a young man, quickly marries and has a child. In this fictional universe, that’s clearly the only natural progression of events in a woman’s life. That trope is later reinforced through the pet characters.

Wow. You know what? As a young woman who met a man, married him, and had children with him, I’m totally offended that this film would have the audacity to depict a woman meeting a man, marrying him, and having a child with him. How dare they portray the very event that allows for the propagation of the human race?! What a disgusting plot line.

The reviewer, Carlos Aguilar, proceeds with his ultra-woke verbal diarrhea and criticizes the film for not hyperinflating the representation of less than 5% of Americans:

In case it wasn’t obvious, Pets 2 makes no attempt at diversifying the notin of what a family is today. No same-sex couples are in sight as pet owners, much less as parents. Nothing that deviates from the default straight married couple is even hinted at.

I have to wonder: had the film actually featured a same-sex couple, even in the background like the infamous Finding Dory ladies, where is the line of acceptability drawn by the woke crowd? Can we ever be truly inclusive enough for these people? If Buzzfeed’s review of Booksmart is any indication, the answer is a big ol’ pile of “nope.”

Film veteran Harrison Ford, who plays “Rooster”—whom I’m assuming is not actually a rooster—serves as an easy target for the review when it’s time to move onto “toxic masculinity.”

Rooster is the embodiment of phrases like “Men don’t cry,” and ” Rub some dirt on it.” This alpha dog rejects vulnerability by preaching about how sissified city dogs are. The character is disturbing in his unapologetic validation of behavior society as a whole is trying to eradicate. He equates courage with arrogance and other outdated perceptions of manliness.

Oy. That one made my head hurt.

There are far too many angles from which to shred this ridiculous review. Instead, a commenter on TheWrap has already done a brilliant job:

Look, dude, half (if not two thirds) of my social circle is LGBQT. I get it; I honestly do. Believe me, as a fat, politicised, sixty year old feminist I am no stranger to identity politics. I even blog on tumblr for pity’s sake. But if this film ticked every box you’d like it to, it would simply be a different kind of cliché. So what if it panders to the status quo instead of providing a learning experience about the danger of promulgating stereotypes? It’s primary purpose is to make children laugh, and hopefully their parents too regardless of gender, sexual orientation, or family setup. Do you think the sequence in the vets waiting room also stigmatises mental illness? because I’m no stranger to that either and it made me laugh like a drain.