Creepy Clown: Dad disciplines daughter with clown mask! The father of the year award goes to… 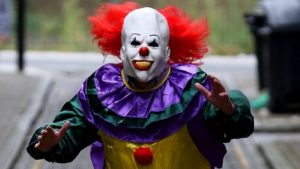 A man from Boardman, Ohio, was arrested Sunday after he reportedly donned a terrifying clown mask to discipline his misbehaving daughter.

Vernon Barrett Jr., 25, allegedly wore a clown mask and chased his 6-year-old daughter around the neighborhood Saturday night, WGN9 reported. The girl, trying to flee from the “clown,” ran into a stranger’s apartment, screaming that a clown was chasing her. This allegedly prompted the man, Dion Santiago, 48, to fire his gun at the “clown assailant,” according to ABC 13. 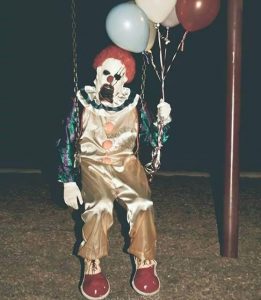 Barrett defended himself by telling police that it was simply a prank, and he thought that this would be a better form of discipline than spanking.

Remember the clown “epidemic” in Texas late last year? See my video below on how I dealt with that! You’re welcome!