CRAZY NEWS: These Nurses Got in Trouble For Looking at WHAT?!? 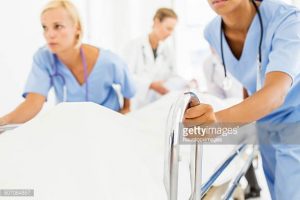 Some nurses get arrested protecting the rights of their patients. Others just want to admire a dead man’s…well…you know!

Talk about getting bored on the job! These girls had nothing better to do than unzip a body bag and check out what a dead dude was working with!

The Denver Post reports that five nurses at Denver Health Medical Center were suspended for three weeks after they inappropriately viewed a deceased patient’s body and talked about it, a hospital spokesman confirmed on Tuesday.

“Multiple staff members viewed the victim while he was incapacitated, including after he was deceased,” a Denver Police report says. “The complainant, Risk Management for Denver Health, made a mandatory report.”

Originally the hospital thought that it was just two nurses involved, but during their internal investigation it was discovered that five nurses participated. Sounds like they just lined up down the hall for a peek!

“Hey girl! Come check this out!”

The peeping incident occurred sometime between March 31 and April 3, but it was not reported until May, when another nurse overheard one nurse from the disciplined group make an inappropriate comment and notified hospital staff.

The nurses that were disciplined “admired” the size of the deceased patient’s genitals and at one point opened a body bag to view parts of the body. A hospital spokesman confirmed details of the incident.

The name and cause of death of the deceased has not been released but leaked reports say his name was Richard Dangle and apparently he passed away from a sudden loss of blood to his brain. Just kidding!