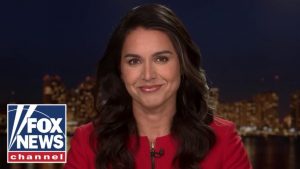 Former Democratic Congresswoman Tulsi Gabbard, who ran for president in 2020 and has not at all been shy of criticizing President Joe Biden and other fellow party lawmakers, has been announced as the headliner for the main CPAC dinner event that will be held later this week, officials said in a statement to Secrets on Monday.

Gabbard, who formerly served as a representative for the state of Hawaii, will be speaking at the annual Ronald Reagan Dinner that is put together by the American Conservative Union’s Conservative Political Action Conference.

The key note address is set to be delivered by Glenn Beck.

A spokeswoman stated that having a popular Democratic speaker for the group’s main dinner, which is set for Friday, is an “extraordinary event.”

Just two hours after this was posted on social media, the dinner sold out, said Matt Schlap, the main boss of CPAC.

Gabbard has recently roiled Democratic circles with her criticism of Biden’s handling of the Russia-Ukraine crisis and decision to consider only a black woman for the U.S. Supreme Court. She has also blasted Vice President Kamala Harris as a weak vice president.

CPAC opens in Orlando Thursday and ends Sunday. Former President Donald Trump and virtually every conservative politician and pundit are expected to speak.