Cow Rape! You can’t make this stuff up 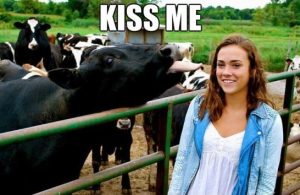 The whack jobs at PETA are back on their soap box with more lunacy. This time they are concerned about the rape culture…of cows.

Take a look at your food! Do it right now. Is there beef, pork, chicken, or turkey on your plate? If so then you should be ashamed. According to PETA you are promoting animal rape for the production of food.

In a recent article PETA states, “Cows and other factory-farmed female animals endure being raped repeatedly, and their babies are torn away from them before they’re all killed.”

The article continues by saying, “When a human is forcibly and involuntarily violated sexually, it’s called “rape.” When animals on factory farms are forcibly and involuntary violated sexually, it’s called “artificial insemination.” Female cows, pigs, and turkeys are routinely raped—their bodies are violated through artificial insemination. Female mammals also often endure botched deliveries, and then their babies are taken away shortly after birth.”

Obviously the lack of protein in these people’s diet has caused brain damage.

Claiming that the artificial insemination of an animal is the equivalent of the rape of a woman diminishes the impact that actual rape has on someone’s life. What about plants? Are we violating them too or does suffering only count if you have a face and can make noise?

Unborn babies have a face. We are murdering them for the sake of convenience to the tune of 750,000 per year. Is murder not worse than rape? Are babies not important? Where’s the outcry from the so called compassionate bleeding hearts? Here’s a fair trade: I’d gladly stop eating meat if you’d stop aborting children. But anyway….

“It is rape when someone sticks their hand into a vagina or rectum without permission. That’s the dictionary definition of rape. We believe that everyone should see the reality of dairy, meat, and turkey production and then, unless they’re ethically blind, they will be appalled. Every decent person abhors and denounces sexual abuse of women but we cannot blithely accept the sexual abuse of other females who happen not to be human but have the same vulnerability to pain. We can’t fill our mouth full of steak, turkey or cheese knowing that mother cows are routinely sexually abused and that their calves — their beloved offspring — are taken from them shortly after birth. Any woman (or man!) with a heart should scream bloody murder on behalf of the animals who can’t scream it themselves.”

You’re certainly allowed to draw your own conclusions but I’ll be over here eating my steak.