Could Pence And Trump Be Making A Truce? New Reports Say Yes. 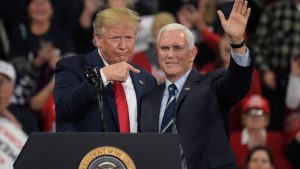 New reports hitting the internet today say that Vice President Mike Pence and President Donald Trump are making amends with one another after a very intense week following the riots at the Capitol building.

Pence and Trump had their first conversation since those events unfolded last Wednesday. Several news organizations have cited a senior administration official as the source for their report.

According to the source, Pence and Trump had a “good” discussion Monday evening in the Oval Office. This seems to suggest that the two leaders have found a way to patch things up, at least for now, after the president accused Pence of lacking courage for not opposing election results.

Pence was presiding over a joint session of Congress when lawmakers, working to affirm President-elect Joe Biden’s victory in the 2020 election, evacuated and took shelter for hours on Wednesday as hundreds of people broke past law enforcement into the building after Trump urged a crowd at a nearby “Stop the Steal” rally to march to the U.S. Capitol. Hours later, just before 4 a.m., Pence read the final Electoral College vote tally, after which Trump committed to an “orderly transition” of power.

The official said Trump and Pence agreed to continue working for the “remainder of their term,” indicating that Pence will not pursue invoking the 25th Amendment to remove Trump from office despite pressure from congressional Democrats.

Still, an impeachment resolution was introduced on Monday that charges Trump with “incitement of insurrection,” and Democrats say a vote will take place on Wednesday.

While the Trump administration only has eight days left, it’s critical right now for Pence and the president to be on the same page. If the impeachment goes through and somehow Trump is removed from office, he won’t be able to run for office again.

Whether you like Pence or think he made the wrong call, it’s good to see leadership hashing out their differences. That’s a good example to set and is something the whole nation could use a little more of.