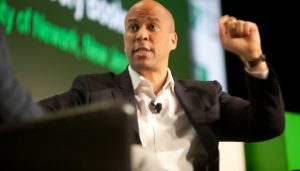 Sen. Cory Booker is not too happy with claims made by Sen. Tim Scott who says that Democrats are the ones responsible for the collapse in negotiations when it comes to the issue of police reform due to the party’s efforts to defund law enforcement agencies, prompting Booker to respond.

The whole idea of defunding police departments is a really stupid one, as anyone with common sense will note. If you cut funding, you reduce the police force and the other resources necessary to keep crime rates in check.

In places where funding has been slashed, there has been a massive increase in the violent crime rate. Again, this is common sense. Less cops equals more crime. But that hasn’t stopped the left from continuing this crusade.

Scott, a South Carolina Republican, and Booker, a Democrat of New Jersey , are the two leading negotiators of the proposed police reform bill, which lawmakers first began discussing following the death of George Floyd in Minneapolis police custody on May 25, 2020. The disagreement between the two lawmakers pinpoints a significant disconnect between both parties on the interpretations of “defund the police,” a term intended to support moving funds away from standard policing toward other forms of public safety and community initiatives that stray away from use of force.

“This is a bill that would have had millions of dollars for police departments … millions of dollars more, additional dollars, because we want to help officers with mental health issues. We want to collect more data so we should give more resources, “Booker went on to state during an interview on CNN ‘s State of the Union.

Scott decried the Democrats’ pursuit of police reform as efforts to defund law enforcement departments during an interview with CBS News’s Face the Nation on Sunday.

Sen. Cory Booker on the end of police reform negotiations: "It was a frustrating experience in the sense that we had the biggest civil rights demonstrations in this country's history asking for change … Got major law enforcement groups to endorse it but we didn't get it done." pic.twitter.com/h0p3GuWkkw

“We said simply this: ‘I’m not going to participate in reducing funding for police after we saw a major city after major city defund the police,'” Scott continued. “Many provisions in this bill [Democrats] wanted me to agree to limited or reduced funding for the police.”

Booker then held his tongue concerning his criticism of Scott himself, saying, “I send him grace all the time, he is a friend of mine.”

“I promised the families we’re going to get something done. I’m still at work. I’m not throwing accusations at either side,” Booker went on to add.

“Negotiations between Democrats and Republicans began in April after former Minneapolis police officer Derek Chauvin was convicted for the death of Floyd,” the report said.

Democrats went on to announce on Wednesday that negotiations have ended, going on to cite the reason for this being the GOP’s refusal to accept changes to the legal protections that are now afforded to law enforcement officers that allegedly protect them from lawsuits and prosecution for their actions while they are out on duty.

“Scott said that Democrats rejected his offer to introduce a bill that included provisions the two parties supported, such as banning chokeholds, limiting police acquisition of military equipment, and providing more mental health resources, claiming that Democrats rejected the plan ‘because they could not let go of their push to defund our law enforcement,'” the report continued.

Scott, a Republican from South Carolina, stated that he’s going to keep trying for legislative compromise “with anyone who is serious about finding bipartisan solutions that bring justice, fairness, and safety for the most vulnerable among us.”

.@margbrennan: Isn’t this just Republican not wanting to look like they are being soft on crime?@SenatorTimScott: “If you want to keep our community safe, you have to properly fund the police.” pic.twitter.com/7gEoya2hgL