Cori Bush Says She Gets Private Security To Protect Her, So Everyone Else Should ‘Suck It Up’ And ‘Defund The Police’ 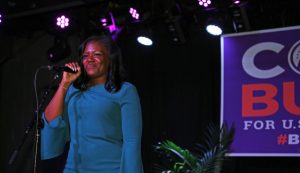 Congresswoman Cori Bush, a Democrat from Missouri, recently stated during an interview she conducted on Thursday that “defunding the police has to happen,” which she said right after telling all of her critics to “suck it up” when she was asked questions about paying tens of thousands of dollars for private security.

“You faced some criticism in recent weeks over your push to defund the police,” a CBS News host said during the conversation with Bush. “Campaign records show that you spent roughly $70,000 on private security, and some critics say that move is hypocritical. What’s your response to those critics?”

“I’m going to make sure I have security because I know I have had attempts on my life and I have too much work to do,” Bush went on to say. “There are too many people that need help right now for me to allow that. So, if I end up spending $200,000, if I spend $10 more dollars on it, you know what, I get to be here to do the work.”

“So, suck it up and defunding the police has to happen,” she continued. “We need to defund the police and put that money into social safety nets.”

In other words, to hell with the normal folk who live in rough neighborhoods and can’t afford their own private security. You aren’t as important as Rep. Bush, who must hire private security so she can stay alive and be an elite in control and work toward expanding the government to take care of you.

Cori Bush: I’m going to make sure I have private security but defunding the police needs to happen. pic.twitter.com/6jbv4HLlGs

Folks, this is what an elitist attitude looks like. They think they are above you and I, that they are more important, thus resources need to be spent keeping them safe and healthy instead of on keeping you and I safe and healthy.

That’s how delusional progressives are.