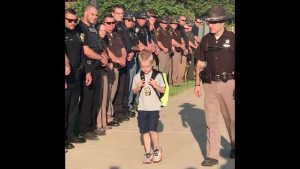 Being a police officer is a really hard job, one that comes with a high level of danger as you’re the first line of defense in protecting people from criminals who wish to carry out all kinds of horrific evils.

Wearing a badge in modern society is doubly dangerous as the media and leftists across the country have worked around the clock to push a narrative that paints up law enforcement as angry, raging racists who want nothing more than to shoot and kill as many folks as possible.

Unfortunately, some police officers do end up giving their lives in the call of duty, such as Terre Haute Police Officer Rob Pitts who was killed earlier this month in a shootout.

Officer Pitts left behind a 5-year-old son, Dakota, who recently returned to school where he received a heartwarming welcome back from 70 police officers.

Dakota returned to school Monday and didn’t want to go alone. So he asked his mother if one of his father’s fellow officers could accompany him to the school.

“Dakota asked his mom if one of his dad’s friends could take him to school, so she reached out to Rob’s friends and families,” Les Hamm, a detective with Terre Haute Police Department, told WTHI-TV.

Dakota was greeted by at least 70 of his father’s fellow brothers in blue as one of the officers walked him up the sidewalk to Sullivan Elementary School in western Indiana.

The officers who showed up to greet Dakota were from all over the state and presented him with a t-shirt and police patch.

This is a beautiful picture of what it looks like when a community comes together to help one of their own in need.

Please remember to take time out each day, if you can, to pray for our law enforcement officers. These people put it all on the line every single day, not knowing if the next shift could be their last.