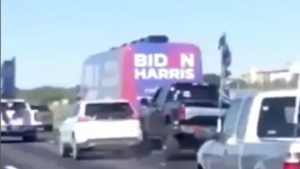 According to police, the Biden-Harris vehicle might be totally at fault in an incident that occurred between the campaign bus and what’s been called a “Trump Train” over the weekend in the state of Texas.

The San Marcos Police Department investigated the crash through online videos and stated the “at-fault vehicle” might be the Biden-Harris Staffer’s car, while the ‘victim’ appears to be a Trump vehicle.

Boy, that’s going to make Joe “What’s My Name, Again?” Biden really ticked off, isn’t it? Well, if he has a lucid moment it will.

“The at-fault vehicle may be the white SUV and the victim appears to be the black truck,” said a statement from SMPD, KXAN reported.

“The Federal Bureau of Investigation is looking into a Friday incident in which a group of Trump supporters, driving trucks and waving Trump flags, surrounded and followed a Biden campaign bus as it drove up I-35 in Hays County, a law enforcement official confirmed to The Texas Tribune Saturday,” reported the paper.

President Trump came to the defense of the folks who participated in the Trump Train, calling them “patriots,” and delivering a scathing rebuke to the FBI for not paying any attention to the many cases of left-wing protesters that have become par for the course across our country this year.

The mainstream media also has ignored the many acts of violence perpetrated by Black Lives Matter and Antifa. They show it on camera, but refuse to acknowledge these groups are responsible and need to be held accountable for their actions.

This same grace, however, is not extended to those on the right.