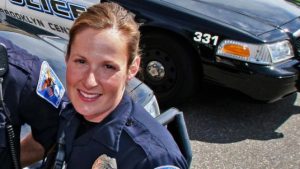 Police officers in Minnesota were forced to put up concrete barriers around the Brooklyn Center home of former police officer Kim Potter Tuesday evening as demonstrators gathered to protest the death of Daunte Wright and started to threaten violence.

“Police guarded the property of Officer Kimberly Potter as Daunte Wright protests turned violent Tuesday night, with demonstrators clashing with police in Minneapolis while Portland’s police union building was set on fire.,” the Daily Mail said in a report the published on Wednesday.

“On Tuesday afternoon, workers were erecting metal fencing in front of Ms. Potter’s home in Champlin, a town a few miles away from Brooklyn Center,” the Wall Street Journal added in their report. “She lives in a planned community dotted with large multilevel houses with green curated lawns. Paper ‘No parking’ signs lined the street near her residence. A Champlin police officer in front of the house said Ms. Potter wasn’t home and referred questions to the Brooklyn Center Police Department. Ms. Potter didn’t respond to calls and texts requesting comment.”

Potter’s address leaked online Tuesday afternoon, and the home could be seen covered in plywood even before either police or protesters appeared. Neighbors, who spoke to the Wall Street Journal, say they feared the demonstrations, which began just before a declared curfew went into effect, would turn violent.

“We’re stressed, we’re nervous. I’ve been told some of the neighbors have left,” one neighbor told the outlet. “It was a horrible situation. We also feel bad for Mr. Wright’s family.”

Potter has not appeared in public but resigned on Tuesday. Brooklyn Center police officials said, in a press conference on Monday, that they believe the shooting that left Wright dead was accidental, and that Potter was reaching for her taser when she grabbed her service weapon instead. On bodycam footage released of the incident, Potter can be heard warning Wright about a taser, and yelling, “Oh, sh**!” once she realized she’d discharged her gun.

The Washington County Attorney’s Office said Tuesday that is reviewing the case. Potter may face charges, though the prosecutor’s office told media Tuesday that they are currently focused on handling the case of Derek Chauvin, the Minneapolis police officer accused of killing George Floyd.

Demonstrations that were held against police in the city of Minneapolis, along with other areas of the country, turned violent, resulting in the arrest of 60 people nationwide. Antifa members in Portland actually set a government building on fire.

This is going to end up like the whole George Floyd mess all over again unless the police step up and start putting down these riots.