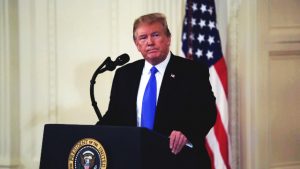 Democratic impeachment managers are getting their butts reamed by conservatives after they completely failed to include former President Donald Trump’s insistence that protesters remain peaceful as they traveled to the Capitol to voice their concerns about potential voter fraud impacting the 2020 presidential race in a video played on the second day of the impeachment trial.

The House Democrats’ 13-minute montage about the Capitol riot, which aired on Tuesday, the first day of the impeachment trial, did not include a clip from the president’s Jan. 6 rally in which he said, “I know that everyone here will soon be marching over to the Capitol Building to peacefully and patriotically make your voices heard today.”

The video played during Democratic Maryland Rep. Jamie Raskin’s opening remarks. It included clips from the president’s speech, interlaced with violent scenes unfolding at and inside the Capitol Building.

Their failure to include the president’s insistence that his supporters demonstrate “peacefully and patriotically” led to criticism from the Right. Republican New York Rep. Lee Zeldin, a supporter of the former president who said the second impeachment trial is unnecessary, criticized the omission.

“The part that they did play of the president’s remarks, of course, end up cutting out the message the president sent to his supporters that day, that those who are heading to the Capitol should do so peacefully and patriotically,” Zeldin stated during an interview donducted with Newsmax. “Of course, as they’re playing the videos and they’re telling their argument, they aren’t going to give the full story. How do you cut it out right at the point where [President Trump] is telling his supporters to do so peacefully and patriotically?”

Trump’s son, Donald Trump Jr., also shared that same sentiment stating that Democrats were relying on clips that he said were edited “selectively” in order to promote their own argument, rather than presenting the truth.

In reality, this impeachment trial should not be happening. Trump is no longer the president. He cannot be constitutionally punished for anything alleged in the article of impeachment against him. The only thing that could happen is he be banned from running for office again.

And that’s the real agenda of the left.