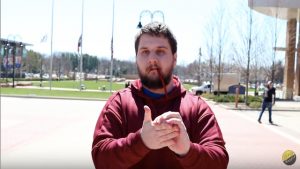 It seems what we adults call “civil dialogue” has become a lost and dying art amongst the current generation of young folk being churned out of the indoctrination centers we call universities.

Groups like Antifa are where left-wing students flocking, opting to punch their opponents in the mouth rather than engage their ideas.

What happened to a member of Liberty Hangout on the Kent State University campus last week is a prime example of the utter lack of human decency that seems to exist in modern political discourse.

The group hosted a “change my mind” event where John Marcinkiewwicz, who is a freshman political science major, assaulted cameraman Nathan Murphy.

Liberty Hangout reported that Murphy and the rest of the group was approached by Marcinkiewicz at around 3:15 in the afternoon and began to engage them on the topic of gun control for a total of thirteen minutes.

He then took some informational pamphlets he had been given, crumpled them up, then struck the camera Murphy had been using, which was a high priced piece of equipment valued at $650, knocking it out of his hands.

As if that isn’t infuriating enough, Liberty Hangout followed Marcinkiewicz on his way to the library to confront him over the destruction of their property and to demand he pay for the damage he caused. He apologized for his actions and stated he did not have the funds to pay for the equipment.

The group has opted not to press charges, instead going through the Code of Conduct at the school which authorities believe will force Marcinkiewicz to replace the camera he broke.

Isn’t it ironic that a person who claims to be all about nonviolence couldn’t control his emotions long enough to adequately articulate a convincing argument to support his anti-gun position so he tries to beat someone up?