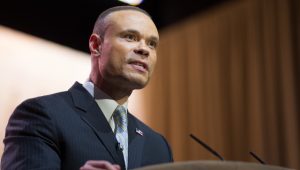 Conservative radio host, who is part of the Westwood One company, was taken off the air this week after he put the parent company on blast over its vaccine mandate.

Cumulus Media, which owns the radio network, told all of its employees that they were going to be required to take the coronavirus vaccine by the end of September in order to be able to return to the office by October 11.

The Dan Bongino Show will now be broadcasting “best of” programs for the rest of this week, according to reports from Radio Ink.

“Friends, Dan is in a tough battle with his radio show syndicator over these immoral, unscientific vaccine mandates,” Bongino Report went on to tweet late Tuesday afternoon.

“We don’t know what’s coming next. But, regardless of the outcome, you can ALWAYS find his podcast here. He’s not going anywhere,” the tweet continued.

Bongino, who was vaccinated and is receiving treatment for Hodgkin’s lymphoma, announced his opposition to the company’s vaccine mandate on his show last week, The Hill reported.

The former NYPD officer and Secret Service agent addressed the situation during his Tuesday podcast hosted on his show’s website.

“They didn’t consult with us, their content providers or anything like that — they just did it,” he stated during the program. “People were subsequently let go.”

“I strongly object, in the strongest possible terms, to this vaccine mandate. The fight with them, candidly folks, is having a real effect. … Behind the scenes it’s getting a little ugly here. I wasn’t on the radio [Monday or Tuesday]. I don’t know what they did, played the ‘best of’ or whatever. You don’t treat people this way. You don’t let people go because they insist their body is theirs,” he continued.

Bongino said he received an e-mail from a former Cumulus employee who was fired because of the company’s vaccine requirement.

The conservative radio host stated they denied the religious exemption from the employee, despite the fact he had been there for the Cumulus company when they desperately needed his help during the coronavirus pandemic.

“Folks, you don’t treat people that way. I’m not going to let it happen,” Bongino proclaimed on his program. “This fight has been wearing me down but it’s not wearing me out.”

“Bongino then lauded New York City municipal employees who marched across the Brooklyn Bridge on Monday against the COVID-19 vaccine mandate,” the report said.