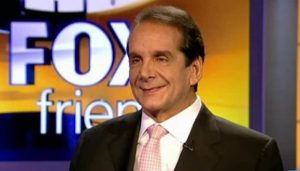 In a letter published on Friday, conservative commentator Charles Krauthammer announced that he only has weeks left to live, a stunning revelation that is causing shock waves through the conservative community.

Krauthammer is an accomplished writer and sayer of truths who has helped shape the worldview of many of the conservative movement’s sharpest modern thinkers, including Ben Shapiro, who wrote in depth about this tragic news.

Krauthammer announced his health situation in a statement. He explained that he had a cancerous tumor in his abdomen that was operated on in August of last year, and that the operation resulted in secondary complications, necessitating his continued hospitalization. A battery of new tests showed that the cancer has now returned. Krauthammer writes:

My doctors tell me their best estimate is that I have only a few weeks left to live. This is the final verdict. My fight is over….I believe that the pursuit of truth and right ideas through honest debate and rigorous argument is a noble undertaking. I am grateful to have played a small role in the conversations that have helped guide this extraordinary nation’s destiny. I leave this life with no regrets. It was a wonderful life — full and complete with the great loves and great endeavors that make it worth living. I am sad to leave, but I leave with the knowledge that I lived the life that I intended.

“My fight is over.” Charles Krauthammer says he’s got weeks to live. Very sad. pic.twitter.com/SIfdz1tQo0

Here’s Shapiro’s take on the influence Krauthammer has had during his career:

Krauthammer is a uniquely kind man; I had the pleasure of meeting him only once, in his office, where he asked probing questions between chatting about baseball. Krauthammer wasn’t a man who reveled in the pure sport of politics – he was someone who saw politics as a surface gloss on deeper debates about values. And he was someone who devoted himself to living a fulfilled and purposeful life. Despite the unique tragedy of his paralysis while attending Harvard Medical School, he went on to graduate and become a resident in psychiatry at Massachusetts General Hospital, work on the DSM-II, and then move onto essay writing, winning the Pulitzer Prize for commentary in 1987. An ardent advocate of a muscular, liberty-seeking America abroad and a cogent critic of governmental overreach at home, Krauthammer was by far the most respected conservative voice of his generation, his generation’s answer to William F. Buckley.

This news is beyond tragic, and there’s no doubt our movement will suffer greatly from not having such a sharp thinker in our midst. However, it’s critical to note that the legacy this man leaves behind will be seen and felt for generations to come thanks to the many contributions he’s made not only in his writings, but in those he has inspired.