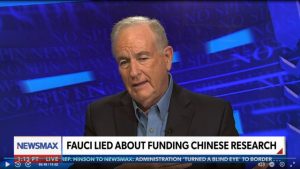 O’Reilly made an appearance on “Eric Bolling: The Balance,” where he went on to say, ”The poor father in Loudoun County whose daughter was raped, that’s going to cause McAuliffe to lose, so Youngkin will beat him eight days from today.”

According to an Emerson College poll conducted Oct. 22-23, McAuliffe and Youngkin are neck and neck at 48% each.

But on a different track, as the interview continued, O’Reilly called for President Joe Biden’s chief medical adviser, Dr. Anthony Fauci, to be fired.

”Fauci himself should be removed tomorrow by President Biden. Does Fauci know the $7 million from the National Institutes of Health went to this, uh, organization eco something EcoHealth? And then that went on to Wuhan?” the conservative radio host said.

”I don’t know what Fauci knew. But I know enough to say that I don’t trust the man. I don’t think 95% of Americans trust him, so why is he there? Get rid of him. His credibility is gone,” he added.

Fauci should have been given a pink slip last year after pretty much everything he said was going to happen, didn’t actually happen.

Now, on top of the documentation that seems to imply he truly did lie through his teeth about gain-of-research funding and the experimentation on dogs, what in the world is the excuse for keeping him at his current post?