Conservative Comedian Steven Crowder’s YouTube Channel Locked And Demonetized; He Says ‘We’ve Got Something For Them’ 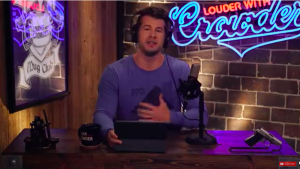 The video site blocked Crowder from being able to upload any new content to his channel for a week and has pulled one of his videos down stating that it violates rules against spreading misinformation about the 2020 presidential election. YouTube also kicked Crowder out of its Partner Program, which is what enables content creators to run ads on videos and make money.

This last move is apparently indefinitely.

“In order to monetize on YouTube, channels must comply with the YouTube Partner Program policies, which include our Community Guidelines, Google AdSense program policies, and Advertiser-Friendly Guidelines,” the platform told The Daily Wire in a statement. “Channels that repeatedly violate our policies are suspended from the partner program. In addition, we removed a video from Steven Crowder’s channel for violating our presidential election integrity policy and applied a strike, meaning uploads are suspended for one week.”

Crowder first announced YouTube’s action against him in a Monday Instagram post accusing the platform of manipulating its community guidelines to target conservatives. He also teased having “something for them [YouTube]” in response to his ban.

“I’ve been warning about this for a long time and now it’s here. BigTech, and specifically Youtube, have painted a target on Conservative’s backs for years, with yours truly being target #1,” Crowder wrote.

“Today, Google/YouTube just fired a HUGE shot across our bow. They are no longer enforcing ‘community guidelines,’ but creating entirely new ones with the express purpose of removing any and all Conservative voices of dissent,” the conservative comedian said. “For the crime of investigative journalism, we are forbidden from uploading, posting or live-streaming for an entire week on the main channel. Don’t worry, we’ve got something for them.”

This isn’t the first time that YouTube demonetized Crowder. They suspended his channel from the partnership program for an entire year, from June 2019 all the way to August 2020.