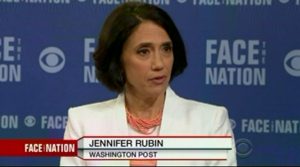 So The Washington Post has a “conservative columnist,” which basically means they have a leftist who, to borrow the language of the day, “self-identifies” as a Republican, who just made a rather wacky prediction about President Trump resigning from office.

Apparently, according to this individual, Trump will resign with 10 minutes left in his term so that VP Mike Pence can pardon him. Pardon him for what you ask? Russian collusion, of course.

They will never, ever let this go.

“I would predict here on MSNBC that when Trump leaves office he will resign the presidency 10 minutes before Mike Pence leaves office, allowing Pence to pardon him if there is not a Republican president to follow him,” Rubin said the network’s “AM Joy” show.

So, here’s the plan, according to Rubin. On Jan. 20, 2021 (or, more likely, 2025), Trump will resign the presidency at 11:50 a.m. (The incoming president is sworn in at the Capitol at noon.) Then, the vice president will be sworn in as president (he’d have to be), and whip out a presidential pardon, which he’d sign. At noon, poof, Pence is no longer president and Trump is in the clear.

Like we said, we’ve heard some dumb stuff before from Rubin, but nothing this dimwitted. Still, there’s no doubt the viewers of MSNBC gobbled it up, especially coming from a “conservative” columnist.

The Post describes Rubin — who it once was touted as a “conservative” author of the paper’s blog “Right Turn” — as an “opinion writer reporting from a center-right perspective.” But in her Twitter profile, Rubin still describes herself as a “conservative blogger at @WashingtonPost, MSNBC contributor.”

That description doesn’t go over to well with the American Principles Project, which last month sent a letter to the Post signed by 37 top conservative leaders to urge the paper to stop promoting Rubin as a “conservative” and to instead hire a columnist who could “eloquently and effectively” defend the policies of Trump and his party.

How in the world did Rubin come up with this garbage? It must be nice getting paid to produce works of fiction without any concern for journalistic integrity or any anchor to reality.

It’ll be nice once the Mueller reports come out and we can all move past this Russian collusion nonsense. It’s absolutely nauseating to continue watching news coverage focused on this instead of on actual issues facing the country.