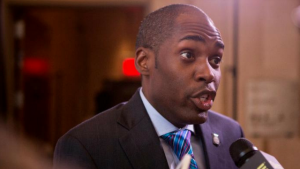 Conservative CNN contributor Paris Dennard made headlines last week after getting chewed out by unhinged libeal CNN contributor, Phil Mudd, who flipped on Dennard when the latter suggested former government officials could rake in handsome paychecks due to their security clearances.

Mudd, who screamed “get out!” at Dennard, has previously used the “n-word” on CNN, also proclaimed “Twenty-five years in the service and this is the sh*t I get” after yelling at Dennard.

"Zero. I get zero dollars from consulting companies that deal with U.S. government. Are we clear?"

The incident went viral and caught the attention of the President, who subsequently praised Dennard…and suggested that Mudd’s security clearance should be revoked like Brennan’s.

But it was most likely due to Trump calling Dennard “wonderful” that cause the left-wing media to dig up some dirt on him, which the Washington Post happily did:

A conservative commentator who was lauded by President Trump this week as “wonderful” and who has argued that past sexual indiscretions should have no bearing on Trump’s presidency was fired from Arizona State University four years ago for making sexually explicit comments and gestures toward women, according to documents and a university official.

The Post adds that “Dennard did not dispute those claims but said he committed the acts jokingly.”

Well, clearly this means that Trump colluded with Russia.

At any rate, it gave CNN enough reason to suspend him, which they happily did, saying in a statement: “We are aware of reports of accusations against Paris Dennard. We are suspending Paris, effective immediately, while we look into the allegations.”

Kind of seems like something they could have figured out pretty easily before hiring him, but whatever.

Dennard told the Post that “This is sadly another politically motivated attempt to besmirch my character, and shame me into silence for my support of President Trump and the GOP.”

At this rate, it’s kind of hard not to agree with him. I don’t know about you, though, but I think Dennard would probably be better off elsewhere anyway!