Congresswoman Greene Stands By ‘Divorce’ Suggestion, Explains What She Meant 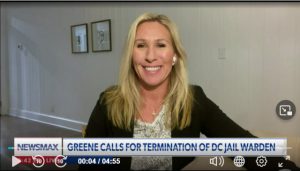 Rep. Marjorie Taylor Green came out on Thursday to defend her suggestion of a “national divorce” between red and blue states, along with her statement saying that Americans who move to conservative states from liberal strongholds like California and New York should undergo a “cooling off” period before they are allowed to vote in an election.

Greene made the “divorce” suggestion on Wednesday during a Twitter discussion where she commented on another user stating he was moving to Miami, Florida from the San Francisco Bay Area, though he was leery of the state’s politics.

On Thursday, Greene took to Twitter again where she posted seven tweets explaining that “threatening a divorce” was a “wake up call.”

“1. You know what is necessary about threatening a divorce? It’s a wake up call to the one offending the other that they’ve had enough. And if the other party cares at all, they look at what they are doing wrong and care to fix it. National Divorce is not civil war. Cont’d,” Greene said her tweet thread, which she then followed up with six more posts.

“2. Divorces happen in court or perhaps for a country can happen in Congress. I’ve been married 26 years, clearly I’m not in favor of divorce. Happy marriages are the result of 2 committed people working together resolving differences and changing behavior that hurts the other,” Greene tweeted.

“3. But the state of our union is currently far from happy, and I really don’t care how many Democrats I offend by calling it out. For your information, you like our red states BECAUSE of our politics and it’s OUR Republican politics that create the very environments you like,” she stated.

“4. So I will NOT apologize when I muse or discuss ideas that stop Democrat voters and donors, who are moving out of the sh[*]tholes they created with their Democrat votes and donations, from ruining GREAT red states by bringing your disastrous ideas and destructive votes with you,” the congresswoman remarked.

Greene had commented on a thread Wednesday that was started by a Twitter user who said they supported “discriminating against transplants” by putting out a “sin” tax on them and then banning them from being able to cast a vote in an election “for a period.”

“All possible in a National Divorce scenario. After Democrat voters and big donors ruin a state like California, you would think it wise to stop them from doing it to another great state like Florida. Brainwashed people that move from CA and NY really need a cooling off period,” Greene posted.