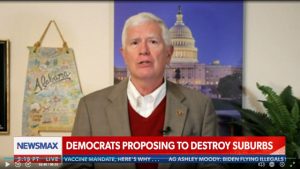 Congressman Mo Brooks, a Republican from Alabama, had a little chat with the folks at Newsmax on Monday where he stated that the current administration has “no concept” of how the free enterprise system works, which is illustrated by the fact they put policies in place that hurt individuals who create jobs in the U.S.

“These people in the White House, for whatever reason, they have no concept of how a free enterprise economy is supposed to work,” Brooks said during an interview with the hosts of “Cortes & Pelligrino” Monday. “But that should surprise no one given that they’re socialists.”

He said that the almost $2 trillion “Build Back Better” plan the Democrats are pushing through Congress is going to end up devaluing the dollar, driving American consumers to cheaper foreign products.

“They’re paying for it by using the federal government at the point of a gun, taking money from individuals, and from businesses who have earned it,” the congressman said. “That’s not a good thing. But to the extent that there is a deficit and debt associated with this particular legislation, you’ve seen the estimates and they are all over the map. That’s going to decrease the value of America’s currency, the dollar, which in turn has an inflationary impact.”

The plan passed the House last week and now moves on to the Senate where all 48 Democrats and two independents must support the measure for Vice President Kamala Harris to cast the tie-breaking vote for it to pass and go to Biden to be signed.

Current estimates from various organizations, all the from the Congressional Budget Office to the Warton Business School located at the University of Pennsylvania, have come to the conclusion that the bill’s budgetary impact will be between $2-5 trillion over the course of the next 10 years.

It seems Brooks is correct. The Biden administration has a real issue with basic mathematics.