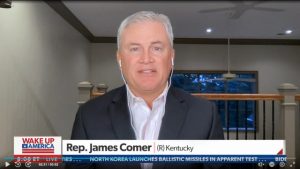 According to Rep. James Comer, there are currently tens of thousands of federal employees who have still not gotten their COVID-19 vaccines and will end up out of work after the deadline passes on Monday to provide proof of having received the shots, and according to him, President Joe Biden will not be able to force them to do it.

“They’ve had plenty of time,” the Kentucky Republican went on to say during his interview on Newsmax’s “Wake Up America.” “They’ve researched it, and for whatever reason, they decided that they didn’t want to be vaccinated. That’s their constitutional right. And that’s the way it’s going to be.”

The White House was expected on Monday to announce that 95% of the federal workforce has complied with the administration mandate, which is expected to go into effect by the end of the day, reports CNN. Of them, 90% have gotten at least one shot, while the other 5% have submitted exemption applications. An administration official said the “vast majority” of the employees are fully vaccinated with at least two shots.

Meanwhile, Comer said given the slow situation in the federal government, “it will take months to go through and determine who’s been vaccinated and who has not,” so “it’s just more chaos in the Biden administration.”

It’s also “terrible” that unvaccinated workers won’t be able to collect unemployment, because they’ll be on unpaid leave, said Comer.

“This is Joe Biden’s way or the highway, and it’s funny he’s treating federal employees this way,” said the congressman, who has created a bill that would provide an exemption for federal contractors from the vaccine mandates.

“Many of the unions in America do contracts and subcontracts on federal projects,” he added. “They’ve reached out to me. You’ve got federal employees and unions furious with Joe Biden. That used to be the base of a liberal Democrat, the federal employees, and the unions, but they’re frustrated with Joe Biden’s infringement upon their liberties. I don’t know how much lower Joe Biden can go in the polls, but he’s fixing to take another big nose dive.”

Comer then noted that the protests that have been going on in Europe against the current crop of mandates and lockdowns could end up happening here.