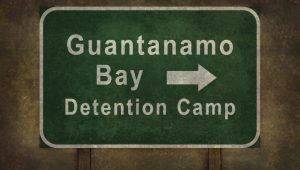 A group of GOP war veterans serving in Congress are applying some pressure to the Biden administration hoping they will reconsider their current plans to close down the Guantanamo Bay prison and relocate the 40 prisoners it houses potentially to U.S. soil.

“As veterans of the Global War on Terrorism, we have serious reservations about the Biden administration’s push to close the Guantanamo Bay Detention Camp,” the nine GOP lawmakers stated in a strongly penned letter that was sent out on Sunday night to  Secretary of Defense Lloyd Austin.

The Biden administration has been under pressure by antiwar activists to shutter the prison camp located at the U.S. naval station in Cuba. Biden has pledged to do just that, but has not explained how he will continue the prosecution of 40 terrorist leaders who still remain imprisoned, including the masterminds of the 9/11 terror attacks. Opponents of the closure warn that nearly 35 percent of the terrorists released from Gitmo have returned to the battlefield, where they continue to mobilize against U.S. and coalition forces in the region.

Representative Michael Waltz (R., Fla.), the first Green Beret to serve in Congress, and a group of eight other war veterans serving in Congress called the Biden administration’s efforts to shutter Gitmo dangerous and raised questions about a plan that they say could put dangerous terrorists back on the battlefield, according to a copy of the letter obtained by the Washington Free Beacon.

“Many of us put our lives on the line to prevent these terrorists from ever returning to the battlefield. Some of us even sustained permanent wounds,” wrote the lawmakers, which include Waltz and Reps. Jim Banks (R., Ind.), Steve Stivers (R. Ohio), Brad Wenstrup (R., Ohio), Ronny Jackson (R., Texas), Andrew Clyde (R., Ga.), Tony Gonzales (R., Texas), Guy Reschenthaler (R., Pa.), and Van Taylor (R., Texas). “Without law of war detention, we could be forced to release these dangerous individuals, allowing them to re-establish their networks and jeopardize American national security interests, along with the security interests of our allies.”

The lawmakers who penned the letter also go on to warn the Biden administration against possibly relocating these terrorists stateside, stating there is “no acceptable reason to bring terrorists to the homeland” and then risk them being released on some sort of legal technicality in an American court.

“It would be a mistake to risk acquittal of a known terrorist because of a prosecutorial error, a technicality, or a miscellaneous legal loophole,” they said in the letter.

I think it’s safe to say these congressional veterans are right on the money. It’s a horrible idea to bring these dangerous and violent men to our country, especially if there is even the slightest possibility they could be let go by a strange court decision.

You can never estimate the Islamic pandering of the radical left in this country. They are willing to do all kinds of crazy things to look like social justice warriors fighting the good fight.