Confessions of a “Mansplainer”! 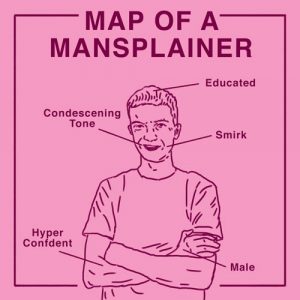 In 2017, the word “mansplain” entered the Oxford English Dictionary for the first time. According to the OED, just 10 years ago the word did not exist, “but the verb (of a man: to explain something needlessly, overbearingly, or condescendingly, especially to a woman, in a manner thought to reveal a patronizing or chauvinistic attitude) and the concept it describes now have a firm foothold in the language.”

The earliest known use of mansplain occurs in a pair of comments on the social networking website LiveJournal in August 2008, said the dictionary. The exchange sees a woman “thanking” a male blog commentator for “mansplaining” to her, and he responds asking if it was really “mansplaining”. The term is often misattributed to writer Rebecca Solnit and her book Men Explain Things to Me, though she never used the term in the essay.

Chances are if you are a woman, then you’ve had something “mansplained” to you. You probably weren’t expecting it, and you definitely didn’t ask for it, but all of a sudden some dude is standing there saying, “Well, actually….” And that’s when you know it’s happening. He’s about to explain something he doesn’t know anything about to you in a condescending manner that suggests you can’t possibly know what he’s talking about.

Just last week, far leftist Canadian Prime Minister, Justin Trudeau, interrupted a woman in the middle of a question during a town hall event, in Edmonton, Alberta, to correct her, saying: “We like to say people-kind, not necessarily mankind, because it’s more inclusive.” Needless to say this egregious case of “mansplaning” has not gone over very well with the women in general and the feminist in particular.

In order prove just how prevalent this practice of “mansplaining” is, in March of 2017, “Another Round” co-host Tracy Clayton took to Twitter to ask her followers to share the worst examples of “mansplaining” they’ve ever endured. The results infuriated so many women that it led to hundreds of people sharing the worst, weirdest, and most rage-inducing things men have tried to explain to them without their asking.

Here are a few examples of subjects of “mansplaining”:

One lady tweeted, “I once had a friend mansplain to my roommate how to correctly pronounce her own name because he thought she was doing it wrong.”

Ms. Rachael said, “My brother-in-law once tried to tell me which tampons were the best to buy, and which bras were the most comfortable.”

Another women tweeted, “I have natural red hair and a man once told me that my hair was not natural because apparently my roots were blonde and there is no way anyone could have my hair naturally.”

Ms. Sillver tweeted, “My boyfriend tried to explain my menstrual cycle to me. He insisted periods happen every 3 weeks and if I got them every 28 days something is wrong with me.”

Ms. Sidney wrote, “I am a professional horseback rider and in 2008 I was named champion of the year in the maiden division. One of my guy friends was talking to me a little while ago (he’s ridden a horse maybe once in his life). I was showing him pictures of one of my previous competitions (that I won) and he kept insisting that my equitation was wrong and started mansplaining to me different ways to make my form better. He also said that men have been riding horses longer than girls so men naturally have a better skill set when it comes to riding.”

Another woman said a man had once lectured her on breastfeeding as she was nursing her baby.

Another was given an unnecessary crash course on tax deductions, despite the fact she’s a certified public accountant.

One woman said a man had once tried to explain to her ‘how to search our library catalog using author and title’, even though she’s a librarian.

Well, please hear my confession, “I admit to being a life-long, chronic “mansplainer” and it has gotten me in trouble on more than one occasion with many women over the years, especially my sweet wife.

My choleric temperament, with its take-charge, know-it-all, attitude tends to try to “splain” everything to my wife of 38 years. In fact, I am so prone to “mansplaining” that I can do it unconsciously with a simple look on my face. When my wife has commented on something that sounds so illogical and incorrect, I have learned to try and keep my mouth shut. However, wiping the smirking, condescending look off my face is much harder to control. When this happens, she says, “Don’t look at me like that!” Like what?” I exclaim. “You know what!” she retorts, “with that ‘how could you be so stupid’ look on your face!”

Ok, my confession has been sincere. But surely some of you ladies will have to agree that there are some really silly, stupid, irrational, off-the-wall, from-another-planet type things being said by a lot of women today (and men) that need some sensible “mansplaining”!

For all of us “mansplainers”, one of the keys to bringing our “mansplaining” under control can be found by employing the immortal tactics of The Gambler, Kenny Rogers: “You got to know when to hold ’em, know when to fold ’em, Know when to walk away and know when to run.”

And I would add, “Know when to “splain” and when it is vain and in vain!