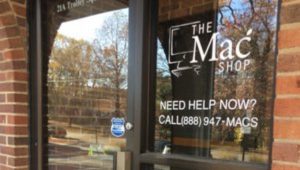 The computer repair shop owner who became famous after turning over a laptop hard drive that is believed to belong to former Vice President Joe Biden’s son Hunter has decided to close his shop after receiving a number of death threats.

A sign was posted on John Mac Isaac’s Trolley Square store just ten days after the presidential election stating it was closed. A neighbor said that the man has left town.

Mac Isaac’s attorney spoke with local media and confirmed that Mac Isaac closed down the shop, but did not comment on if he had left town. He did say that Mac Isaac received death threats.

Della Rocca told the Journal that his office had communicated with Wilmington FBI agents and Delaware’s Assistant United States Attorney Leslie Wolf about the situation, saying, “I’ve been in touch with federal law enforcement, yes.”

The hard drive triggered a firestorm after The New York Post published a story on the alleged contents of the drive, which had been given to Rudy Giuliani. The story claimed that emails on the laptop showed that when Joe Biden served as vice president in 2015, he met with an executive from Burisma Holdings while Hunter Biden had been employed by Burisma. That claim was vehemently denied by the Biden campaign.

Democrats responded by alleging the story was part of a “Russian disinformation” campaign, and some social media outlets suppressed the story, arguing that the information was suspect.

Will someone please explain to me why it seems like the radical left in this country is so obsessed with Russia? It feels like we’re back in the Cold War all over again.

Anytime some dirty little secret gets revealed from the left, they immediately point the finger at Russia. It’s actually starting to get a little weird.

No one should face death threats for doing the right thing and dragging evil dark deeds out into the light. Here’s to hoping that John Mac Isaac can get his life back on track.