The Commish and His Dallas Dream 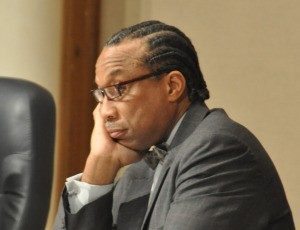 Dallas Commissioner John Wiley Price listens to opening statements in his corruption trial – No wonder he hates the police.

Dallas County Commissioner John Wiley Price voted to oppose a resolution to honor murdered police officers. He actually believes that the slain officers brought it on themselves. Apparently in the mind of this oxygen waster if you are a police officer that is killed in the line of duty you should not be honored for your sacrifice because you are guilty for the “crime” of putting on the uniform and deserving of your fate. Basically, you got what was coming to you.

Well Mr. Price how bout this: Let’s remove all law enforcement from the areas in Dallas you represent. Then let’s build a fence around those areas. Don’t get me wrong! The folks living there can come and go as they please. They aren’t prisoners. However, law enforcement can’t enter those neighborhoods. The fences are not there to keep people in but rather to keep the law out. Follow me Mr. Commissioner? Those neighborhoods are now “cop free zones.”

I hope you enjoy your new space of safety that’s free from the oppression of law enforcement. Check in with us every so often Mr. Price to let us know how your utopian experiment is flourishing. Meanwhile the rest of us will continue living our regressive existence in a world where the badge of authority and law matters. We may be ignorant in your estimation, sir, but at least we will be safe.

Dallas Commissioner John Wiley Price listens to opening statements in his corruption trial – No wonder he hates the police.